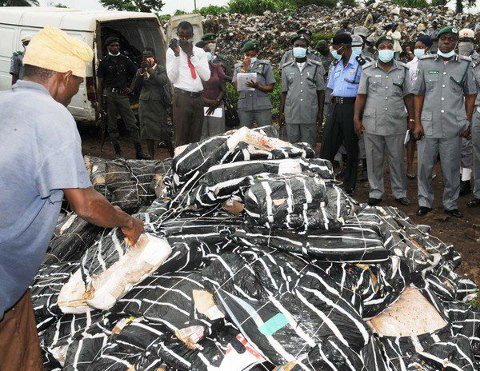 The items were intercepted at the Port and Terminal Multipurpose

Adegoke, while parading a suspect, Mr. Emmanuel Eko who was the

importer of the cargo, said the military wares were intercepted at the

According to the Controller, the suspect, who claimed to be a member

of the British Army and presented a Nigeria passport, had few years

Although, the area comptroller did not give the number of uniforms

seized, sources closed to the Command alleged that about 500 Army

other classified items were brought to the port by the importer.

Adegoke, who displayed the intercepted items to reporters at the

terminal, said the military uniforms and boots which were mixed up with

other items in a white bus shipped in from Britain, were discovered

during routine examinations and checks.

He said: ?It is the practice that when we have military wares, they are

headquarters to that effect, and when the goods come, they are always

on ground to receive them.

?When you look at the list, one tends to suspect foul play, moreso the

concerned, hence the need to do a thorough check on the

Considering the security challenge in the country, the Customs chief

country. He noted that terrorists now dress like solders.

According to him, the suspect refused to cooperate with his officers

and nobody has come forward to speak on his behalf.

?The enforcement officers asked him many questions but he was just

dribbling them. He is not cooperating with them.

?During our routine examination and checks, we discovered that a

Volkswagen LT bus owned by the suspect has all thess stuffs inside.

What we discovered are seizable numbers of Army camouflage uniforms

and we have also discovered during examination some pairs of Army

?Although the suspect has refused to make statement, but we always

officers and men on ground to deal with the unusual situation. We have

because we have the entire wherewithal and intelligence readily

available to discover this type of things.