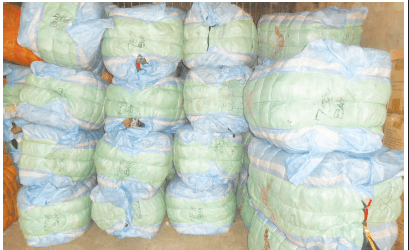 The Federal Operations Unit Zone ?A? Ikeja of the Nigeria Customs, has released her first quarter report of anti-smuggling activities of the zone. The report which was presented by the controller, DC Usman Adamu Turaki had it that 482 different Seizures were made this quarter.

The DC stated that the success which, when compared with the corresponding period of 2014, represents over 45% increase in terms of quality and quantity of seizures.

DC Usman who promised to continue to strategise on the operational plans so as to ensure the zone is a step ahead of smugglers said, ?We have institutionalised the concept of Customs Community Relation (CCR) which is meant to provide an enabling environment for operations in our places of assignment. This became imperative as a result of cases of incessant attacks of our operatives at some volatile areas.

?We have also collaborated and synergised with the various Security Agencies in line with six point agenda of the CGC. In addition, we have incorporated ICT in our anti-smuggling drive and the resultant effect has been phenomenal.

?We have recorded remarkable seizures through the concept of Risk Management and Cargo Selectivity. This method enables us to access the seaports and areas under our watch to ensure effective control and monitoring. All these became possible through the magnanimity of the CGC, Alhaji Abdullahi Dikko CFR, who directed the upgrade of our ICT facility.?

He also re-emphasised that the Federal Operations Unit Zone ?A? Ikeja is an Enforcement Arm of the Nigeria Customs Service, with multifaceted responsibilities which include (but not limited) to suppression of smuggling, facilitation of legitimate trade and enforcement of implementation of Federal Government fiscal policy on trade.

Significant decline recorded in maritime incidents in Gulf of Guinea