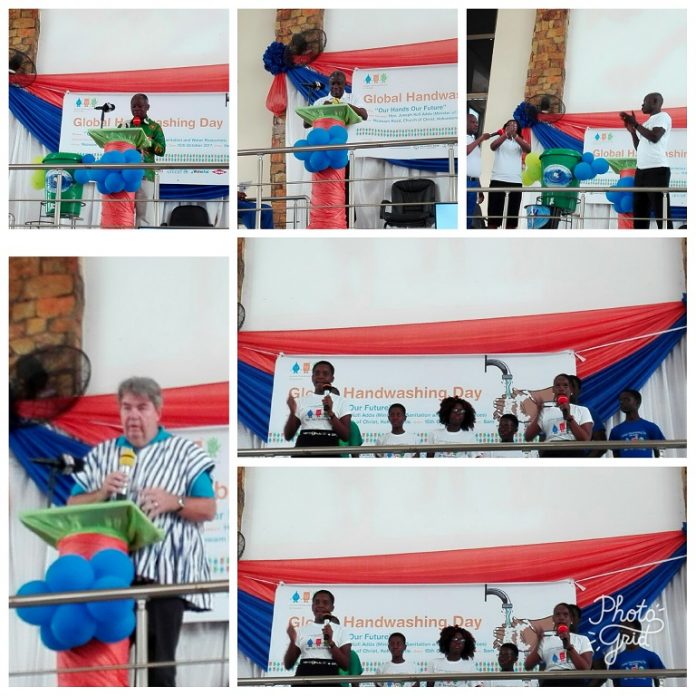 According to him, UNICEF is working closely with communities around the world, installing latrines and water pumps in order to eradicate these diseases claiming innocent lives and also causing economic hardship to the country.

These improvements typically show immediate results, in the form of improvements in child health and attendance at school.
This he said, UNICEF will continue its Community education on the basic sanitation and hygiene practices to help achieve the desired results in the country.

In a speech read on behalf of the Minister for Sanitation and Water Resources, Hon. Joseph Kofi Adda, he noted that the perennial outbreaks of cholera in can greatly be eradicated if people adopt proper hygiene practices.

According to him, in the year 2014, Ghana as a country recorded 28,975 cholera cases with 243 deaths. It is obvious that this tragedy indeed crippled national development apart from losing innocent lives.

Open defecation and improper hand washing has been identified as the major cause of cholera and other related diseases in Ghana.
“It has been established that one gram of faeces can contain ten million viruses, one million bacteria, one thousand parasites and one hundred worm eggs.

This is indeed frightening and that is what makes the safe disposal of faeces and handwashing with soap of the crucial public health priorities,” he explained.

According to him, his outfit is committed to reducing water and sanitation related diseases in the country; since health promotion is one of the important steps towards development and a better quality life.

He therefore advised all and sundry to edeavour to adopt the culture of washing their hands with soap after visiting the toilet in order avoid contacting germs and bacteria.

The Chief Executive Officer of Community Water and Sanitation Agency (CWSA) Ing. Worlanyo Kwadwo Siabi, noted that as part of efforts of commemorating this year’s Global Handwashing Day in Ghana, the Agency took a giant step by collaborating with all the stakeholders including faith-based organizations to help educate the public on the essence of washing hands with soap.

According to him, Handwashing with soap is included in the sustainable Development Goals Target 6.2 for sanitation and hygiene. By adding a crucial handwashing component to existing and ongoing sanitation activities, the critical health benefits to achieve the SDG 6 can be realized. This he said, the Global Handwashing Partnership initiated the first Global Handwashing Day on October 15, 2008, mobilizing millions of school children to wash their hands with soap.

This he said, the involvement of f churches have been a major part of the Global Handwashing Day celebrations to sensitize the members and also use them as conduit to households and communities for handwashing promotion.

CWSA since 2001, has provided the anchor for the public private partnership for handwashing with soap under its mandate for water and sanitation delivery and hygiene promotion.

Global Handwashing Day is a yearly advocacy day to raise awareness and understanding about the importance of handwashing with soap as an easy and effective way to prevent diseases and save lives. Celebrated every 15th of October. This year’s celebration is on the theme: “Our Hands, Our Future!”

4 Major Challenges Faced By The E-Commerce Sector In Ghana

THREE more countries to adopt Bitcoin as legal tender in 2022?

We Need a Peoples’ Movement and Not the World Economic Forum