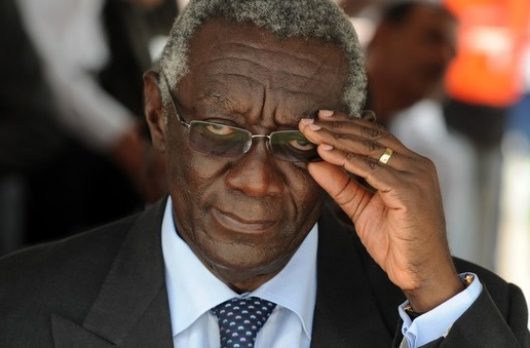 Former President John Agyekum Kufuor says he regrets not being able to provide a permanent solution to the Dagbon crisis which occurred during his tenure in office.
Perhaps being the only regret he had as President of Ghana, he said, ?there was one event that I have had the occasion to tell the world and I pray to God that it wouldn?t ever happen again. The Dagbon crisis, it shook me to my foundations and I pray that it doesn?t happen again. And I pray that there will a permanent solution so that that traditional part of our country will find itself restored to harmony.?
The former president expressed these sentiments on Joy FM when he spoke on a range of issues following his retirement as the first gentleman of the state in 2008.
Ex-President Kufuor noted that he achieved great heights during his tenure, citing the country?s attainment of a middle income status in 2006 and the introduction of the National Health Insurance Scheme.
?The eight year period I was privileged to serve Ghana marked perhaps the period of the highest growth economically and socially. Ghana became middle income in 2006, we saw some of the highest growth points, production in cocoa for instance, national health insurance scheme?,? he remarked.

Retirement and love for politics
The former president said his love for politics has not given him the opportunity to take a rest as he ideally planned for his retirement.
?Ideally, I want to keep healthy and strong. [But]I love politics. It?s natural with me. I grew up with it and so I want to be in there and continue to be able to help my party to go into power and supposed my party were in power, I will want to be able to contribute to policy formulation and also occasionally to express an opinion behind the scenes,? he stated.
Ex-president Kufuor noted that on an average, he receives 30 visitors a day.
?In my retirement, I thought I was going to have perhaps a free and lesser burden period but I find out now because I?m not surrounded by protocol, I?m in a way exposed. All the many friends I made around the country and even from beyond Ghana come in on basis of good will and truly my nature is such that I cannot stop them from coming.
?And I find that my house has become like a town hall. Every day from morning to night I get visitors, many of them just drop in. they don?t come by appointment or anything, they just come. Averagely, every day, not less than 30 to 40 people come from all over,? he said.
Sale of Ghana Telecom
On the sale of Ghana Telecom, the former president said he has no regrets taking that decision and if given the opportunity to do take such a decision again, ?I will do it a hundred times for the betterment of Ghana.?
According to him, Ghana telecom was draining the economy because ?it wasn?t efficient and it wasn?t competitive considering that there were other companies like MTN and Spacefon who were beating Ghana telecom in competition.?
Government in 2006 traded its 70% shares in the national telecommunications company to Vodafone International Holdings B.V. for $900 million.
Source-Graphic