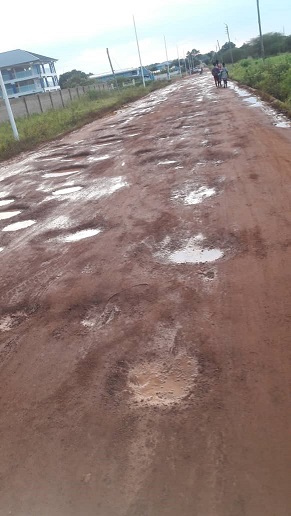 Residents of Damweo, a suburb of Bolgatanga in the Upper East Region, have called on government to repair the bad roads in the area, to help reduce the rate of accidents.

The Damweo road links major suburbs and facilities to the regional capital Bolgatanga, including; the Ex-Tee Crystal hotel, the Great Victory Academy and A1 Radio.

When the Ghana News Agency visited the area, it was observed that the main road had deteriorated and large potholes created after the heavy rains in the region.

The pot holes and large depressions collect rain water and make it difficult for vehicles and motorists to ply.
According to some residents who spoke to GNA in an interview, the road started deteriorating about five years ago and the recent rains had worsened its condition.

Mr Benjamin Awuni, a resident, said “Motorists run into these potholes on daily basis endangering their lives as well as pedestrians who use the road and because the water is usually collected in the potholes, vehicles that ply the road sprinkle water on pedestrians anytime they get into the potholes,” he said.

The bad nature of the road has deterred most investors from the community as people would not patronize facilities such as private schools, hotels among others, in the area, he added.

Mr John Atiah, another resident of the area, lamented how people struggle to ply the road and said the rate at which accidents occurred on it called for urgent attention.

He said “there was an appeal to Feeder Roads and it was even alleged that a contractor had been assigned to site but till date we have not seen any new development”.

He appealed to benevolent persons to come to their aid by leveling the rough surface with gravel, to act as a temporal solution, while residents waited for government to intervene.

Mr Atiah urged motorists and other road users to ply the road with caution to prevent further accidents that may lead to loss of lives.