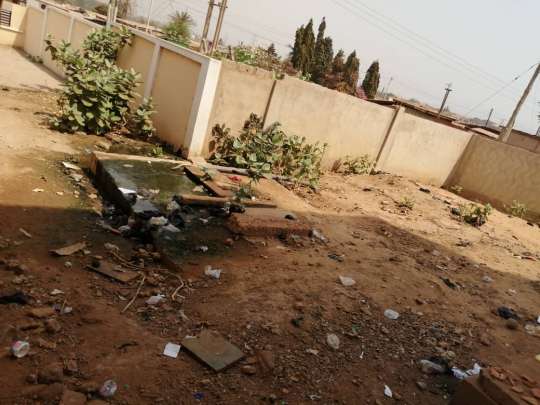 A Community based Health Planning and Service(CHPS) in Tema Newtown is now a possible source of diseases and apparentt discomfort.

A manhole located on the premises of the Adjetey Ansah Community-based Health facility has burst open, spilling effluents on the compound and beyond.

The spillage, streaming in front of the Adjetey Ansah Memorial School, which is adjacent to the CHPS compound, would soon lead to the breakout of a communicable disease.

The Ghana News Agency observed that a hole had been created in the wall of the CHPS zone to enable the effluents flow out of the premises into a gutter in the area.

The immediate surroundings of the manhole was covered with algae with the whole community engulfed in the stench emanating from the outpouring excreta.

Information gathered by the GNA indicated that the manhole which was originally constructed to serve only the CHPS compound was now serving the entire population of the Adjetey-Ansah School.

The school’s toilet facilities were connected into the manhole after the construction of a new school complex to replace a dilapidated one, leading to the early exhaustion of its holding capacity resulting in the constant overflow.

The GNA gathered that few people now attended the CHPS compound which offered services like Out Patient Department and child health promotion (weighing).

Some residents of the area called on the TMA to as a matter of urgency find a lasting solution to the manhole as according to them, the health implications of the spillage could be dire.

Some students who also expressed concern said they had observed only one dislodging of the manhole in the past two years adding that the stench was unbearable.

Madam Cherub Kwarteng, Tema East Sub-metro Director, responding to the issue, said her office was yet to receive official complaints but assured that her officers would immediately assess the issue and get it fixed.