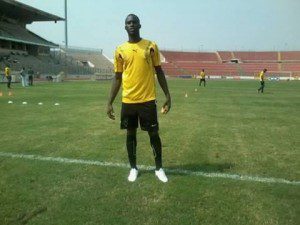 Istanbul FC budding striker Daniel Adade is eyeing a move abroad after an explosive season with the Ghanaian second-tier side.

The 18-year-old has raked in an astonishing 20 goals in all competitions this season for the ambitious Division One League side.

Adade is undoubtedly one of the brightest stars emerging from the country?s second-tier league, propelling his side to 7th on the zone three table with only a game to end the season.

The youngster is eyeing a move abroad to continue with his development.

?The season has gone pretty well and I?m happy with my performance,? he told GHANAsoccernet.com

?It?s the dream of every player to play in Europe and so when the opportunity presents itself, I will grab it.

?I think I have what it takes to survive there and therefore I?m keeping my fingers crossed.

?We are excited that we managed to stay in the league which is important for us. We?re only disappointed we could not qualify. But we?ll live to fight another day.

Supremely talented, this young striker is known for his agility on the pitch and nimble footwork that allows him to pass through the tightest defence undeterred.

He is the poster boy for the Akyem Techiman-based with top local clubs believed to be keeping an eye on his progress in his native country.

The youngster has been making waves as he has managed to hone a fine playing style which is characaterised by great acceleration on the field, excellent dribbling skills and the ability to play with both foot.

Adade missed out on Ghana?s Under-20 squad for the 2013 World Youth Championship after suffering a slight injury but he has since recovered and banging in the goals at will.