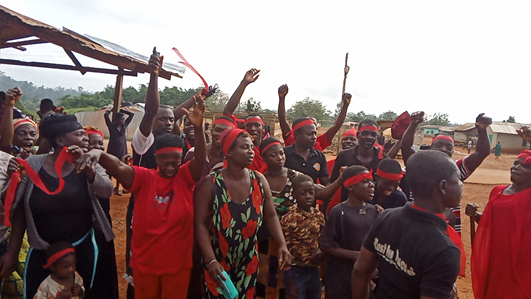 Residents of Danso in the Bosome Freho district of the Ashanti region have vowed to prevent any illegal mining activities in the community.

According to them, they would not sit down unconcern for some few selfish people to connive with some foreign nationals to destroy the forest reserve which protects Lake Bosomtwe and other water bodies in the area.

Opanin Kwabena Kyei, an opinion leader in the community speaking to journalists during a demonstration by the residents, accused some chiefs in the community and politicians of trying to help illegal mining activities in the area.

According to some residents who took part in the demonstration, their cocoa farms were being destroyed by the illegal miners while river bodies which serve as the main source of drinking water were being polluted.

“Our cocoa farms and other farm produce have been destroyed, our only source of drinking water, ‘Dannie’ and the forest around it is under attack”, they told journalists.

Mr Yaw Danso, District Chief Executive for Bosome Freho, whose name was mentioned as being part of those supporting the illegal activities, refused to speak to journalists when he was approached to react to the allegations.