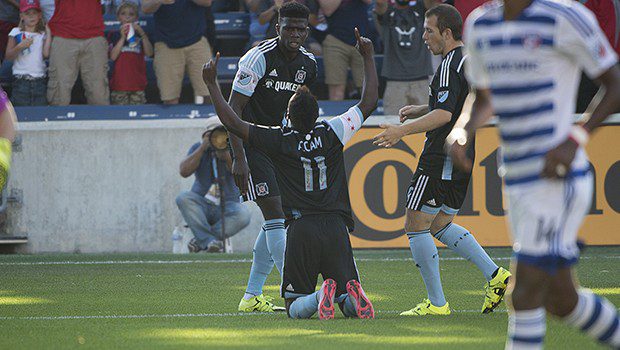 The 24-year-old cushioned the lead for Frank Yallop?s side with a 26th minute at the Red Bull Arena but English-born Ghanaian Lloyd Sam inspired Red Bulls back into the game with a brilliant assist as they claimed the maximum.

Fire?s Canadian manager Yallop started both Accam and his Ghanaian compatriot Patrick Nyarko in attack and their truculence paid early dividend as they combined to pile pressure on the host; scoring two goals before the first half-hour of the time.

Jeff Larentowicz converted a 13th minute penalty after Nigerian?Kennedy Igboananike won the spot kick after he was tripped inside the box.

Fire piled the pressure on the host to score the second of the night and it arrived just at the 26th minute after a show of some delicious display of artistry and lightening-pace thrill.

Michael Stephens cleared a loose ball in the Fire?s box and the former Helsingborg IF star gathered it near midfield, beat a defender with his incredible skill and better physique and approached the box with vim and vigor to cut back goalkeeper Luis Robles for an easy tap in.

Accam?s finish sent Fire cruising to an early victory but things soon went to hell when another Ghanaian blood enter the party. The former Charlton Athletic star Lloyd Sam produced a moment of magic to set up Mike Grella to level the scoring after?Bradley Wright-Phillips had halved the deficit for the host.

Both Nyarko and Sam were replaced in the latter stages of the second-half by Fire and Red Bulls but Accam completed the game with a Man of the Match performance.

He has now scored 8 goals in the MLS for Chicago Fire.

Watch David Accma?s incredible goal for Fire in the MLS on Friday night below.?