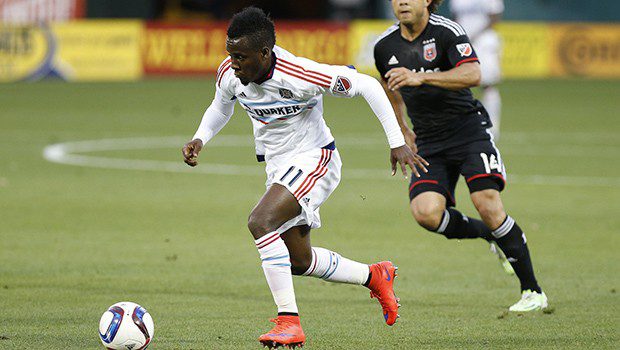 David Accam is looking to put the frustration of the past three weeks behind him and make his presence felt as the struggling Chicago Fire aim to haul themselves off the bottom of the Eastern Conference table.

The speedster has missed the Fire?s last three regular season games and their two US Open Cup victories after picking up an injury to his left hamstring while on international duty as Ghana opened their African Cup of Nations qualifying campaign with a 7-1 victory over Mauritius on June 14.

The game was bittersweet for the 24-year-old, who scored his first goal for his country in front of hometown fans in Accra, but he also picked up an injury that has sidelined him at a crucial part of the season for Frank Yallop?s side.

?It felt great to score my first goal for my country,? Accam told MLSsoccer.com of his 90th-minute strike which sealed an emphatic win. ?It felt great, it was a home game, my family, everyone was watching, so I felt like I had to do something. And I was really happy to get my first goal.?

He has been relegated to a role of frustrated onlooker since returning to Chicago, however, as what was initially reported to be a ?slight strain? has kept him from training until this week.

?For me, it?s really difficult because I thought I was playing well, my confidence was back, I scored on international duty, so I thought I was coming here to help the team, and the injury was OK,? he said. ?The worst thing for me is watching on TV, watching my team lose every time on TV, it?s difficult. So I wanted to work really hard and come back and help the team.?

Accam hasn?t played since scoring in the Fire?s 3-2 home defeat to Orlando City on June 6, and Yallop is being understandably cautious with his reintroduction. The former Helsingborgs IF attacker is the club?s joint top scorer with four goals, while he has also notched one assist, won four penalties and played a part in the dismissal of four opposition players.

However, he has started just eight of the Fire?s 16 games, with a halftime appearance in another. The Fire?s struggles in his most recent absence -? two losses and a draw -? show just how important Accam is to the squad.

?He was with our fitness coach today, just ticking along, and hopefully he?s over the worst and we can have him for the weekend,? Yallop told reporters via conference call Monday. ?It?s really dragged on to be honest. From what I was told was a slight strain from Ghana, all of a sudden he?s not played for three or four weeks. It?s frustrating, but he?s getting close and hopefully he?s OK for this weekend.?

Accam?s absence has come during a poor run of form that sees the Fire without a regular-season win since May 30, and although last week?s 1-1 tie at the Houston Dynamo arrested a run of losses, the return of such a pivotal player will be key if Yallop is to get his side back in the race.

That it came at the same time as a prolonged injury to fellow DP Shaun Maloney (back spasms), suspension to Matt Polster and now another possible lengthy absence for captain Jeff Larentowicz (herniated disc in neck) has just added to the Fire?s misfortune this year.

?David has got four guys sent off, won four penalty kicks for us and I think he?s a big difference maker for us,? Yallop told MLSsoccer.com. ?We need him back as quick as we can, but the big thing for me is making sure that he?s 100-percent healthy when he comes back. It?s been frustrating, to be honest, him and Shaun have been out together, and they?re a pretty good tandem.

?So we?ve had our injury problems, but it?s good to, hopefully, have David back, if not for this weekend, moving forward in the next few weeks.?

The Fire play host to the Seattle Sounders, currently second in the Western Conference, on Saturday and Accam is hoping to play some part in that game.

?I?m there now; I think I?m 100 percent, maybe not 100 percent, but I?m almost there and maybe ready to go on Saturday,? Accam said. ?It depends on the coach. The best thing for me is not to start on Saturday, maybe come off the bench and see how it goes.?