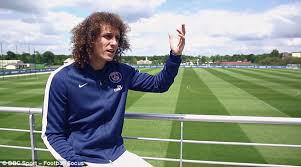 David Luiz was delighted to round out a ?great season? with Paris Saint-Germain by completing an unprecedented domestic treble ? and has now set his sights on UEFA Champions League glory with the French club. EdinsonCavani grabbed the only goal of the game as PSG defeated Auxerre 1-0 in the final of the Coupe de France on Saturday, having already won Ligue 1 and the Coupe de la Ligue.

CNPP Congratulates Adeleke On His Victory In Osun State Election