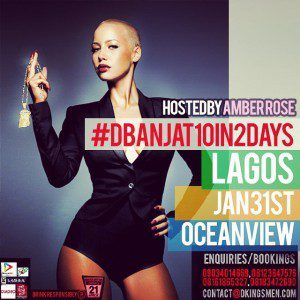 To celebrate his 10th anniversary, D?banj is rolling out the drums and going all out to celebrate with his fans?around the world with live concerts planned in major cities.

The anniversary event starts off on Saturday, January 31, 2015 in Lagos with a star-studded celebrity party to be hosted by American diva, Amber Rose tagged ?Feeling The Nigga Weekend?.

Speaking with NET on his choice of Amber Rose to host the kick-off party in Lagos, D?banj said:

?It?s a party, it?s not a concert, we want to kick-off the 10th year anniversary so who best to come and host it than someone who really knows how to hold down a party and of course she?s hot (laughs).?

On the cost of bringing the beautiful American model, whose marriage to Wiz Khalifa, crashed last year, the DB Records boss said:

?No, it doesn?t matter what anybody thinks about that, what matters at the end of the day is what I want and everybody already knows that when it?comes to access to having international friends, no one has it more than I do.

No one has brought international acts to the country more than I?ve done.

So it doesn?t matter what it?s costing me and more so if it was all about the money, you probably would have heard adverts from last year about it, so for me it?s not about the money, it?s about having a great kick-off and believe me
during the course of the year so many other people will come that will make you wonder: ?how did D?banj do this.?

In truth, D?banj holds the bragging rights as the Nigerian act who has brought more international stars to the country than any other. The likes of Hollywood actor, Idris Elba, rappers, Tinie Tempah, 2Chainz, Pusha T and several others.