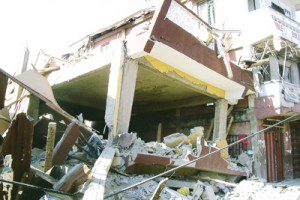 Death toll from a building which collapsed in Lagos, Nigeria’s business hub, rose to three on Saturday as authorities suspended search and rescue efforts.

The three-story building collapsed in the early hours of Saturday when the occupants were still asleep on Freeman street, in the Lagos Island area of the state.

Damilola Oke-Osanyintolu, head of Lagos State Emergency Management Agency, who confirmed the new casualties, said the remains of the dead victims have been transported to the mortuary, while the nine injured are being administered pre-hospital care by the agency.

Oke-Osanyintolu said the victims comprise a child and two adults, adding that the agency is moving the unstable structure to ground zero.

Residents living in the area said the building had been under renovation.

Building collapses often occur in Nigeria as some property owners and developers do not adhere strictly to planning and building laws and regulations. In most cases, heavy loads are placed on the building and substandard materials are often used in construction work.

Akufo-Addo embarks on a day’s trip to Lagos