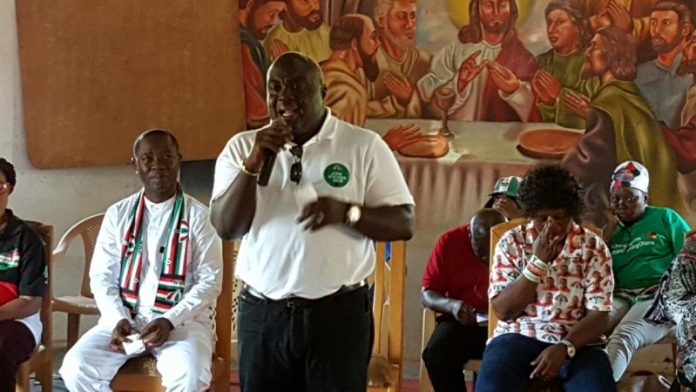 The Chief of Staff Julius Debrah has ended his five day intensive campaign tour of the Volta region with immense gratitude to the people for the overwhelming support they give to President John Mahama.

He campaigned in several communities addressing mini durbar a and rallies during which he also helped placate minor rifts, strengthened the local campaign teams and revived the support base leaving behind a more formidable regional party, better focused on delivering the Volta Regional NDC’s gap one million agenda in this year’s polls.

Regional Minister Helen Ntoso, the Regional party executives and key national executives were upbeat as they criss-crossed the northern belt of the region.

From Peki, through Vakpo, Sovie Nkwanta to Dodo, women sang ‘arise, arise for Ghana’ as their men chanted in anticipation of a great electoral victory for President Mahama. From Hohoe, Havé through Ho the people gathered and stood along the streets to hail John Mahama.

The Zongos, like never before, reaffirmed their unrepentant love for the NDC and its leader. The men charged their communities as the women danced along with Cadres chants.

The Traditional authorities were bolder than ever in re-affirming their support as they made clarion calls to the people of the region to rally around President Mahama and the NDC.

Two other major engagements also took the Chief of Staff’s attention during the campaign.

They were the massively attended ‘encounter with Professionals’ and the ‘Jobs Summit’, both of which copiously laid out the development and job creation agenda of President Mahama to the middle class and the youth respectively.

At every stage and every engagement the Chief of Staff was unable to end his speeches without observing the level of cooperation and love shown by the people of the Volta Region. The embrace was palpable as the libations were instructive.

Going To IMF: I Am Disappointed In The Government – Kennedy Agyapong