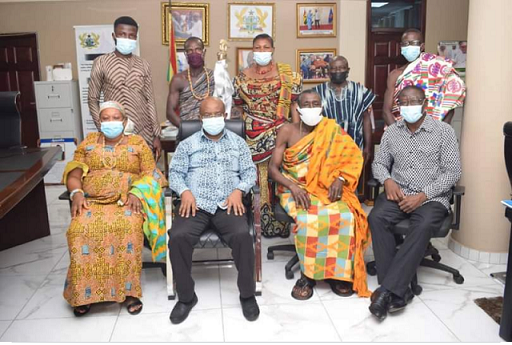 Delegations from the Klefe and Matse Traditional Areas in the Volta Region have paid courtesy calls on Dr Archibald Yao Letsa, the Volta Regional Minister to congratulate him on his re-appointment by President Akufo-Addo.

They also discussed developmental projects in their respective areas with the Minister.
First to call on Dr Letsa is Togbe Koku Dzaga XI, the Paramount Chief of Klefe Traditional Area and his retinue made up of Chiefs, Queens and Elders of Klefe to the Residency in Ho.

Togbe Dzaga XI, on behalf of the Area, expressed appreciation to the Minister for ensuring that their request for the Klefe Township roads and streets to be tarred had been met.

He said they were grateful that the path, linking Klefe and Ziavi was transformed into a tarred road network.
The Paramount Chief was happy that work had commenced on a streetlight project that Dr Letsa promised the Area.

Togbe Dzaga XI touched on other developmental needs of Klefe, including infrastructural upliftment of the Klefe Basic School and the uptake of the Klefe Vocational/Technical School by the government.

Dr Letsa, in response, expressed gratitude to the Paramountcy, adding that as a son of Klefe, it was important that he got the government to undertake the projects for the Area.

He was optimistic that “more would be done to improve the road network from Klefe to surrounding towns.”
“Concerning, the Basic School, I assured that there would be infrastructural upliftment.”

Dr Letsa appealed to the Klefe Traditional Area to remain united to speed up development.
The next to call on Dr Letsa is the Matse Traditional Area led by Togbe Adza Mensah Il, the representative of the Paramount Chief.

He also extended words of congratulations to Dr Letsa on his re-appointment as the Regional Minister and also wished him well in the years ahead.

Togbe Mensah Il seized the opportunity to bring some of the challenges facing the Volta Technical Institute to the Minister’s attention.

In his remarks, Dr Letsa was grateful for the courtesy call by the Area.
He promised to raise the challenges faced by the Institute before the Minister of Education on behalf of the Traditional Authority.

The Traditional Rulers were accompanied by the Assembly
Member for the Matse Electoral Area and the Ho Municipal Chief Executive.