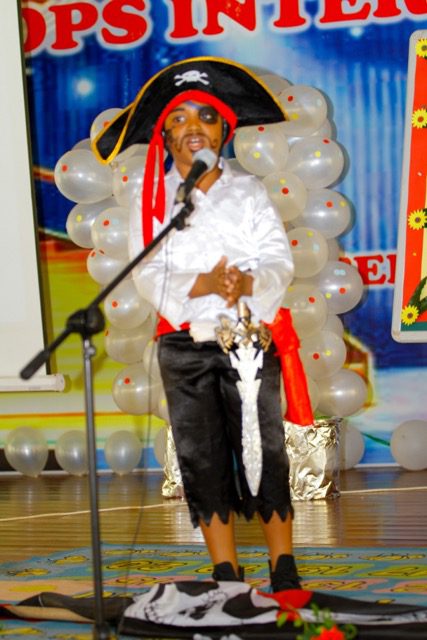 The Delhi Public School (DPS) International has organized a ?Fancy Dress? Competition for pupils to showcase their talents through performing arts. DPS constantly exposes its pupils to different cultural and academic activities to enlighten the children in different aspects of their lives.

Participants from the lower classes of the school put up splendid acts about history and important personalities who have had positive impact on society. Others portrayed various professions and their importance in present times.

Some of the students used the opportunity to talk about important messages about various destructive activities that take place in society and the need to stop such acts.

The most notable presentations were the ones that appealed to countries to stop creating weapons of mass destruction, the need for every individual to save water which is the source of life, the importance of blood donation and a campaign to encourage people to stop smoking due to its harmful effects.

Another eye-catching performance was that of a young boy who acted as Mahatma Gandhi, and the Indian leader famous for his teachings about nonviolence and becoming martyrs of change.

The display by a class three pupil about Kwame Nkrumah and his independence declaration also drew large applauds from both teachers and parents who were present to observe at the event.

Akshaya Roshan who played Cinderella and Saransh Baghera who portrayed the need for blood donation were adjudged the winners for Class Three.

Raj Thakwani who replayed the courageous Alexander the Great and Shriman Jha who presented the harmful effects of smoking were winners for Class Four (A). Adam Seidu who reenacted Neil Armstrong?s first landing on the moon was the winner for Class Four (B).

The Director of DPS International and CEO of B5 Plus Limited, Mr. Mukesh Thakwani was very impressed with the abilities of the children.

He acknowledged the importance in exposing children to a variety of extracurricular activities to build their confidence and teach them skills beyond the classroom.

He says DPS is committed to holistic education to churn out intellectuals who are ready to conquer the world.

?DPS is always involved in different types of academic and cultural activities that will help children in different aspects of life. The act of public speaking and confidence building is very important so that they can function effectively in any part of the world and I?m happy that the level of confidence in the children is improving tremendously?, he added.

The Principal of DPS, Mr. David Raj also applauded the cooperation of parents and encouraged them to allow children to participate actively in every activity that the school organizes.

He says the complete development of a child is the task of both parents and teachers so the need for parents to create a strong bond with the teachers to solve the needs of every child.

Mr. Raj believes that, ?Whenever parents and teachers both take initiatives on a child, there is a fast development in those children. The child benefits a lot, he or she tends out to be a smart kid, all rounded?.

Some parents who shared their views were very impressed with the level of display by the children.

Mrs. Kelechi Mbanefo is a parent to one of the students. She says the programme will have a lot of positive impact on kids and added that, ?It?s an excellent thing to do. The children get a lot of exposure by participating in such programs. It helps to build confidence in them so that they can socialize easily when they travel to meet other people. Involving the parents is also an excellent idea?.

Another parent who chose to speak on condition of anonymity disclosed that the program was very good for a number of reasons.

?It gives us the opportunity as parents to come and see how our children interact with their peers. It also gives children the platform to do public speaking which is important for their development. It gives them the opportunity to research and know the personalities they try to play. Go out and learn new things they never knew about these personalities and come to share their knowledge with their peers and us the parents. I learnt some new things today which I never had any knowledge of,? he added.

DPS has won several awards in various national and international competitions. The school had two students in the last five contestants of the recently held National Spelling Bee Competition which Vishal Thakwani, a twelve year pupil eventually won. He will represent Ghana in the international spelling bee competition which will be held in the United States.

The school also emerged victorious in the last International Mathematical Olympiad with more than 2400 participants.