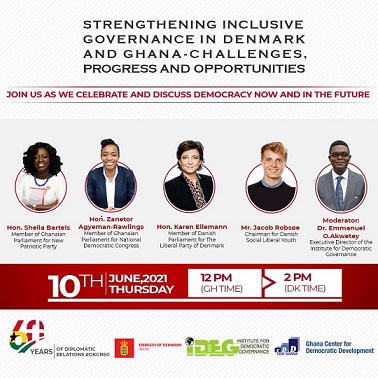 Madam Karen Ellemann, Member of Parliament (MP) for The Liberal Party of Denmark, says a nation’s democracy can thrive if it is centred on education and youth development.

She said investments in education should be focused on grooming the youth in skills acquisition, as well as, consciously bringing them up as members of a democratic society.

Madam Ellemann made the remarks on Thursday during a webinar held on the theme, “Strengthening Inclusive Governance in Denmark and Ghana – Challenges, Progress and Opportunities.”

Madam Ellemann said in order for the youth to develop as members of a democratic society, a conducive environment needed to be created for their voices to be heard.

“We can begin by creating representation for our students in the various schools to contribute to government policies and other issues in the country. Living in democracy takes hard work to maintain it,” she added.

Madam Zanetor Agyeman-Rawlings, MP for Klottey Korle, said polarisation due to partisanship politics encouraged the “winner takes all attitude” which excluded many people from the benefits associated with democracy.

This, she said, had undermined the chances of especially women and the vulnerable in society to have equal access to opportunities.

“Over the years, there has been lack of inclusiveness not only for women or the vulnerable in society but also the norm is that once you do not belong to the Government of the day, you are left out,” she said.

The MP said democracy was a culture that must be practiced; thus, she called for transparency and accountability both on the part of Government and citizens.

In effect, she said it would push more females into higher offices, not only in politics but also the coperate world.

She said in order to shift away from the notion that one can only make it by joining politics, Government should increase investment in the private sector to create more avenues for citizens to be financially independent.

Madam Bartels said over the years, the educational system promoted rote learning which only produced “illiterate literates” who could not think outside the box.

However, she said the current changes and improvements in education made by Government in areas such as vocational training would promote creativity and speed up prosperity in the country.

Mr Jacob Robsøe, Chairman for Danish Social Liberal Youth, said democracy should not be static but needed to develop and change over time.

He advised that focus should be on the next generation to create a sustainable future for democracy.

Mr Robsøe said this could be done by creating mentoring programmes that would create the avenue for many young people, especially women to participate in politics and democracy.

Also, he said the mentoring programmes would provide them with a better understanding on the subject and what to expect before they ventured into it.