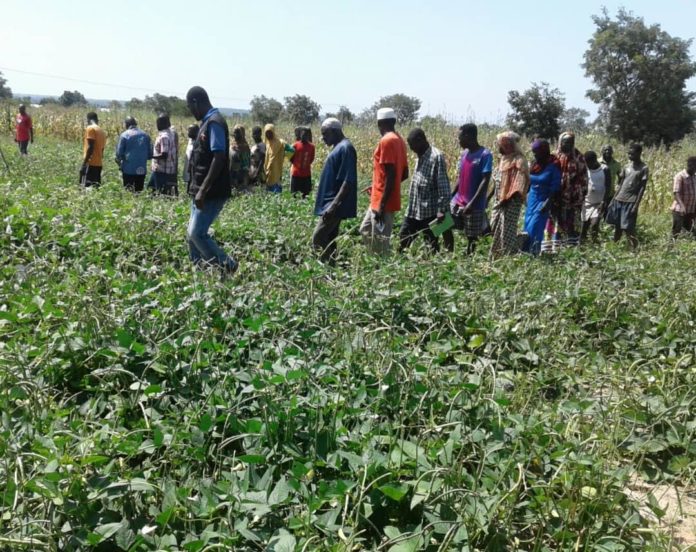 The Savanna Agricultural Research Institute of the Council for Scientific and Industrial Research (CSIR-SARI) is carrying out a field trial of improved cowpea varieties in Wa to allow farmers to improve their lots when released for commercial production.

The project is funded by the Bill and Melinda Gates Foundation (BMGF) under the Accelerated Varietal Improvement and Seed Delivery of Legumes and Cereals in Africa (AVISA) project.

Dr Theophilus Kwabla Tengey, the Cowpea Breeder and Research Scientist at the CSIR-SARI, told a team of farmers at a research field in Wa that the new varieties were of high yielding, early maturing, drought-tolerant and climate-resilient.

The 40 farmers from selected communities in the Wa West District and Wa Municipality were at the research field to conduct a participatory varietal selection on 11 new cowpea varieties to enable the CSIR-SARI to arrive at the appropriate cowpea variety for farmers in the region.

Dr Tengey said there was the need for the CSIR-SARI to develop climate-smart crop varieties for farmers to produce due to the unreliable rainfall pattern in the country.

“Indeed, because of climate change, we need to develop climate-smart varieties. Climate-smart means that the variety matures early, and also fits into what consumers want. The farmers are here to help us select the materials that they want.

“The breeders have done their part by evaluating these varieties. Now, these varieties have reached a state that we want the farmers to also participate in the process,” Dr Tengey explained.

He said the participatory varietal selection was necessary to increase the adoption rate of those varieties by the farmers.

Dr Tengey noted that the farmers, who participated in the activity, selected cowpea varieties that were early maturing, have large seed size of a range of seed coat colours-white, brown and red, among other varieties.

He said that was partly because of the uniqueness of those varieties in the market and expressed the hope that farmers would adopt the new varieties when released to help improve their farming activities.

Dr George Mahama, an agronomist at the Wa Station of the CSIR-SARI, observed that cowpea was one of the crops that could improve the livelihoods of farmers if they took its cultivation seriously.

He explained that both men and women could produce cowpea and urged the farmers to follow good Agronomic Practices, such as land preparation to help maximise the potential of the improved varieties.

Dr Mahama advised the farmers to adhere to the appropriate planting distance – 60 cm between rows and 20 cm between plants in a row – to improve the crop performance.

Some of the farmers expressed content with the crop varieties on the field and gave the assurance they would adopt them when released.

“If we get the early maturing crops it will help us because the rainfall here is not reliable,” Mr Sansew Issahak, the Upper West Regional Chairman of Cowpea Farmers, said.