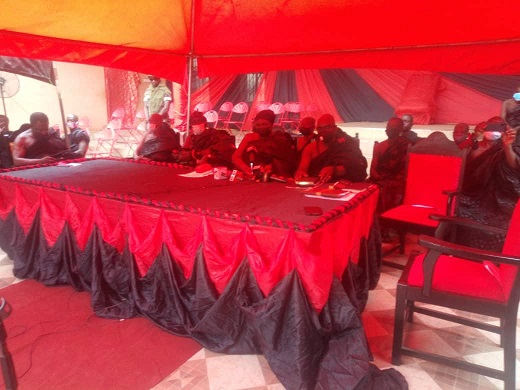 Odeefo) Boa Amponsem III, who was the Paramount Chief of Denkyira Traditional Area in the Central Region, reigned for 60 years from 1955 to 2015.

He died five years ago.

He was the 25th Paramount Chief of Denkyira and one of the longest-serving Traditional Rulers in Ghana.

Born on Saturday, November 11, 1922, and died on Wednesday, December 2, 2015, Odeefo) was one of the powerful and influential traditional rulers in the Country.

The Denkyirahemaa Nana Ama Ayensua Saara III and Nana Essiam Kwaakontan III, the Sanaahene of Denkyira and Chairman of the funeral planning committee announced the death at a media briefing on Friday.

Outlining the funeral arrangements, the Denkyirahemaa said there would be 40 days ban on funerals and noise-making from Feb 20 to Sunday, April 4, 2021, to precede the burial ceremony.

Pre-interment activities will be held throughout the Denkyira State from Sunday, April 4 to Saturday, April 10, 2021.

The late King would be laid in the state amid the performance of traditional rites from Sunday, April 11 to Tuesday, April 13 at Dunkwa-on-Offin, the Administrative Capital.

The final funeral rites and burial activities will be from Wednesday, April 14 to Sunday, 17 at Jukwa, the Traditional Capital.