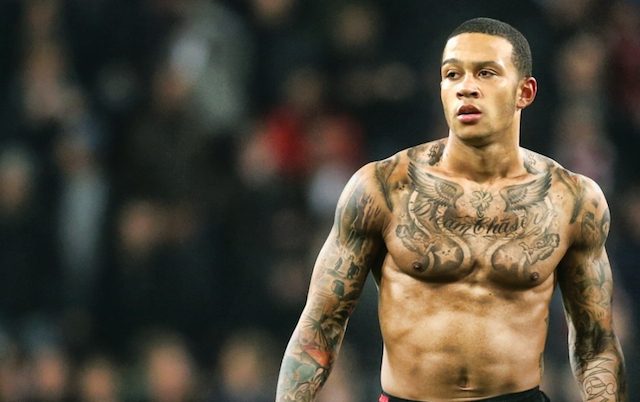 Dennis Depay, the father of Manchester United star Memphis, has criticized his son for fabricating stories about their broken relationship, labeling him a ?lie?.

The father and son have been at each other?s throat with reports suggesting Dennis abandoned the son when he was only four.

Depay has such an unhealthy relationship with his father that in 2012 he dropped his Ghanaian surname from the back of his shirt.

The former PSV Eindhoven star now simply wears ?Memphis? for club and country because of his hatred for his father.

But the Ghanaian father of the Dutch international has denied the claims of his son, claiming they are all fabricated.

?Saying that I didn?t see him after he was four is a lie. It is unbelievable, it is not nice. He is my son and I love him. I am the man who gave him his first ball,? he told the Sun.

?He was not abandoned by me. That is not true. I was always there for him.

?I saw him on YouTube talking about his dad, saying he didn?t want to put my name on his back. It made me feel terrible. I would love to be back in touch with him. I miss him so much.

?The divorce happened but I was always going to see him. I was giving money too.

?There was no problem with access. I could see Memphis whenever I wanted. He stayed with me lots of times and I?d buy him clothes ? and footballs. I was always visiting him and they know it.?

Dennis also revealed that his son suffered at the hands of his mother?s new partner as he was beaten while growing up.

?With the new guy Cora had a hard time and so did Memphis. He and the other children hit Memphis sometimes so I would go and help him.

Read: Full list of Sir John’s properties he willed to his family

Rainwater swamped roomS, soaked clothes and other items in Accra