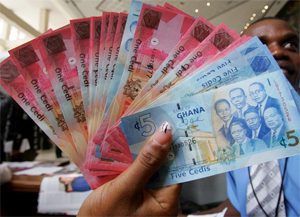 Depositors with valid claims are to be paid by May ending, Mr Eric Nana Nipah, Official Receiver and Liquidator of the collapsed nonbank financial institutions, has said.

He said out of the total claims worth approximately GHC6.4 billion that was received at the close of the extended deadline for the submission of claims for these organisations – 347 micro-finance companies, 39 microcredit companies, 23 savings and loans and finance house companies; legitimate claims admitted for processing and payment after validation was in the region of GHC5.66 billion.

Mr Nipah made the disclosure in a presentation delivered on his behalf by Mr Kojo Oppong Nkrumah, the Minister of Information, on Thursday at the meet the press series, which was held to give an update on the COVID-19 pandemic in Ghana.

Mr Nipah noted that the approximate GHC740 million difference between the total claims received and the value of the legitimate claims admitted for processing and payment was due largely to two main reasons: Invalids claims, which were rejected and setoffs and cross lending – that is some depositors who had either taken loans from some of these same entities or had in their custodies placement from some of these (resolved) companies.

“So when you net that off, in addition to those that were invalid you will get a difference of GHC740 million. So what they have validated to pay is GHC5.66 billion,” he said.

“Now based on those validations, the Receiver and Official Liquidator has commence work on some GHC5.32 billion, leaving an amount of GHC340 million that is going through the very final processes of second level cheques.”

“Now based on total cash payments to be made by the end of the depositor payment exercise, it is expected that the population of individuals depositors numbering about 297,000, whose claims have been validated and accepted in the resolution of the aforementioned groups of companies and ultimately not less than 290,000; that is 98 per cent in number of individual claims will be fully paid in cash, the remaining two per cent of individual depositor claims will be paid by a combination of cash and bonds.”

On the next steps of the payments, Mr Nipah intimated that they were first of all concluding the depositor payment process, and the key next steps to be undertaken were that they want to conclude the final GHC340 and make payment accordingly.

Adding that they expected that by the end of May, they should be done with that one.

He said there were some of the organisations, whose books and records still had challenges and they were processing those for some further investigations.

Mr Nipah said they would finally issue a report to the Bank of Ghana on the depositor payment scheme.