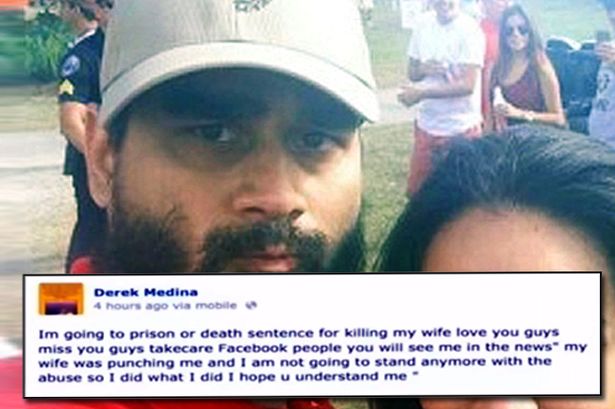 Derek Medina admitted taking the picture on his phone and uploading it on to the social media site.

He failed to convince the jury that he had shot Jennifer Alfonso eight times in self-defence after years of abuse.

He said his wife was threatening him with a knife when he shot her in their home in Miami, but prosecutors said she was cowering on the floor.

When he posted the picture, he wrote on Facebook that he expected to go to prison or be sentenced to death for the killing.

Prosecutors successfully argued that the 27-year-old wife was in fear of her life when she was shot in August 2013.

Medina had vowed to kill her if she left him and she had told friends she intended to do that, the court heard.

Miami-Dade State Attorney Katherine Rundle said: “No family should ever have to see their daughter killed and then exhibited worldwide on the internet like some macabre trophy to a husband’s anger.”

Medina, 33, faces a sentence of 25 years to life for second-degree murder.