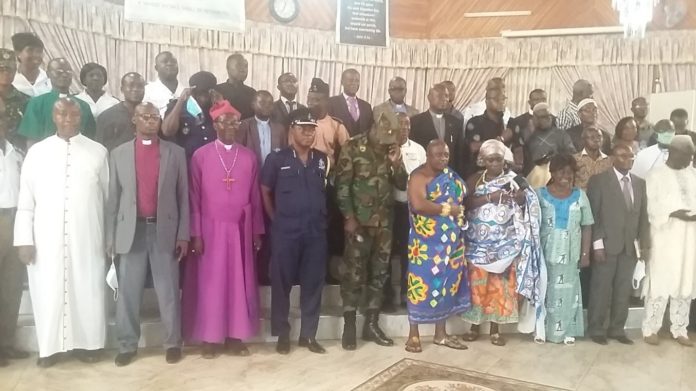 Nana Oboaman Bofotia Boamponsem II, Kontihene of the Sunyani Traditional Council, has called on religious leaders to desist from prophesying on the 2020 general election to protect the peace of the country before, during and after the election.

He said such prophesies were bound to cause political tension in the country since every political party was eager to win.

So prophesying on who would win or lose at such critical moments could lead to counter attacks, he said.

Nana Boamponsem made the appeal at a Peace Summit on Election 2020, jointly organised by the Christian Council in Bono and the Muslim community.

On the theme: “Promoting Peace in election 2020,” the Summit aimed at bringing together all stake holders in ensuring peace before, during and after Election 2020.

It was attended by representatives of the Electoral Commission, Muslim communities, all the political parties, Pentecostal churches of Ghana, National Association of Charismatic and Christian Churches, Peace Council, Traditional Council, security officers and the public.

He entreated ministers of the gospel to go out with statements that could bring the political parties together in promoting peace and accelerate development of the country.

Nana Boamponsem entreated the media to be circumspect in their choice of words and exhibit a high sense of professionalism, as the wrong use of just a word could tear the nation apart.

He asked the media to be neutral in carrying out their duties and avoid being partial so that the public could trust and rely on their publications.

Nana Boamponsem called on supporters of political parties to stop attacking and threatening their opponents, adding that everybody could not belong one party.

Major Godfred Asanpang, Second in Command of the Third Battalion, Sunyani, urged the public, particularly the youth, to make peace their topmost priority and avoid violence before, during and after the election.

He urged all who had decided to foment trouble on the Election Day to rescind their decisions because the security services were adequately prepared to deal with such miscreants and protect law abiding citizens.

He urged the public to cooperate with the Military, Police and other security services to secure the ballot boxes and other voting materials.

Major Asanpang said there would be security presence at all the polling stations and urged the public not to entertain any fears but go out to cast their ballots freely.