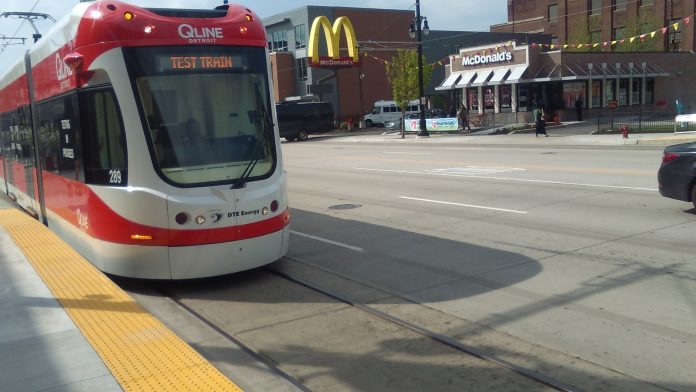 On May 12 the much-heralded QLINE will be launched along Woodward Avenue in the city of Detroit. This transportation vehicle looks like a hybrid of both a street car and an extended bus which operates on rails.

The project has been touted by the corporate media as the latest edition in a number of other business ventures which ostensibly represent the renaissance of the city.

However, if this effort had undergone any serious analysis, evaluation and debate among the people of Detroit it would have never been funded at the level of the official cost of $140 million. Any debate and electoral referendum in favor of the QLINE would have failed if the desire was to meet the needs of the people of Detroit.

This QLINE scheme was ten years in the making when it was first broached in 2007 under the administration of Mayor Kwame Kilpatrick. There were persistent funding shortfalls until the federal government under the Department of Transportation, along with the State of Michigan agreed to provide assistance.

Nonetheless, it was the same federal government which reduced subsidies to municipalities in 2009 at the height of the Great Recession which brought massive cuts in public transportation services throughout the metropolitan Detroit area. The Southeast Michigan Regional Transportation Authority (SMART) in response to federal cutbacks slashed routes which would take people from the central city to the suburbs and back. Within the Detroit Department of Transportation (DDOT), whole routes were eliminated and dozens of bus lines were rescheduled to run less frequently providing no services at certain times of the day.

Such a policy does not provide the people of the city, documented as being the poorest of any other major urban center in the United States, with the public transport needs to travel to work, for shopping, medical visits and other necessities. Most of the people who are new residents in the Midtown and Downtown areas of Detroit own automobiles or utilize Uber, Lift and Zipcar.

In addition to the QLINE, there is the new hockey and basketball arena owned by Ilitch Holdings through the granting of free land, massive tax breaks and the transferal of public revenue to private interests. The Ilitch operation located on the edges of downtown was a totally unnecessary project since Joe Louis Arena on the riverfront was perfectly suited for the same sports activities. Joe Louis Arena, named after the legendary African American boxing champion of the 1930s and 1940s, is scheduled to be demolished with its land turned over to a private bond holding group which was involved in the forcing of the City of Detroit into financial ruin.

To build the arena which is to be accompanied by another entertainment and housing district for the partaking of wealthy white residents who are expected to re-locate and frequent these establishments, thousands of people were systematically forced out of the area previously known as the Cass Corridor. The Ilitch Holdings arena-entertainment complex is uncritically praised as a hallmark of the commitment of the billionaire ruling class to the rebuilding of the city.

The City of Detroit’s first white corporate-imposed mayor in 40 years, Mike Duggan, announced in late April that there was a new acquisition of land in the Cass Corridor, now often referred to as Midtown by the local business and government-funded news outlets, to the tune of $77 million in investments to construct a housing complex. Undoubtedly, if the trend continues for Midtown and Downtown apartments, lofts and condominiums, the prices are far above the level of affordability for the majority of the African American people who constitute over 80 percent of the population.

Although the Duggan publicity narrative about the latest Cass Corridor/Midtown site is that the location is vacant after the closing years before of the Wigle Recreation Center, its abandonment being a manifestation of the economic and social downturn in Detroit, a group says that it has already rejuvenated the location through a sporting association.

According to the Detroit News, “The site is the home of ‘the Wig,’ a DIY skatepark built by Community Push three years ago, when [Derrick] Dykas says the area surrounding the Wigle Recreation Center was in disrepair. At that point, the center had been shut down for almost a decade, and left in its place was tall grass and trash.” (May 1)

This same report goes on to quote this local activist as saying, “When we came and started building, we were picking up dirty needles, condoms, and there were kids that were right out here playing on recess while there’s guys shooting up in the building next door,’ Dykas said, pointing to a school across the street. We got them out of here. We made this place safe again.”

Such an occurrence as this illustrates clearly that none of the projects being promoted by the leading corporate interests now effectively running the municipal government are designed to encourage African Americans, Latinos, Middle Easterners and working class people in general to remain in the city. At present tens of thousands of owner-occupied homes across Detroit and Wayne County are slated for tax foreclosure.

Moreover, there is no documented proof that the proliferation of a small number of prestige projects can actually generate sustainable economic growth. Beyond the construction of the arena and high-priced housing units how many people will be able to benefits from the profits gained through the exorbitant rents charged by the landlords who are given tax breaks in such operations?

Despite the propaganda of the Duggan administration and his corporate backers, Detroit is still the most underdeveloped major municipality in the United States. The decline of the automotive industry (1975-2009) and its subsequent packaged-bankruptcy and restructuring, has not benefited the people of Detroit as a whole.

Car transportation was deliberately promoted in the city for decades. In 1956, the remaining street car lines which at one time had provided citywide and regional transportation links were pulled up at the aegis of the automotive industry. Nothing was ever implemented as an alternative for the needs of the working population and poor except the insufficient bus lines which have suffered from neglect and downsizing for years.

These factors are compounded by the predatory municipal lending practices of the financial institutions that ensnarled the declining population in unrepayable loans and interests-rate swap swindles. In 2013, under the undemocratic imposition of emergency management, the City of Detroit was forced into bankruptcy by a corporate law firm, Jones Day, in contravention of the electoral will of people throughout the state of Michigan.

Over 600 people with employment, residential and business interests in the city filed objections during the initial bankruptcy court proceedings before Judge Steven Rhodes in 2013. Yet Rhodes continued with the farcical process further transferring wealth from pensioners, the City of Detroit public assets and its homeowners to the same banks which engineered the economic crises.

Transportation, Housing and Education: The Keys to a People’s Revitalization

The Motor City Freedom Riders (MCFR), a grassroots organization which has advocated the development of a genuine regional transportation system in metropolitan Detroit, recently called for a demonstration on the opening day of service for the QLINE. MCFR will gather at the northern starting point of the QLINE on Woodward Avenue near Grand Boulevard early on the morning of May 12 to expose the utter waste of public resources and lack of practicability of such a venture.

In a May 2 statement issued by MCFR it emphasizes that, “the region’s political and economic elite is breaking out the champagne to celebrate the QLINE, but they’ve shown little interest in a new push for real regional transit that will address the transit crisis and make a positive difference for bus riders and the broader public. If they refuse to act, we will…. The transit crisis is an issue which intersects with so many others: education, environmental health, access to employment, disability justice, economic development, climate change, racial equality, and independence for our elders, and so much more.”

When there is inadequate public transportation and a burgeoning housing crisis this can only lead to further population decline. During the census period of 2000-2010, the city of Detroit lost approximately 237,000 residents, one-quarter of its people. This was largely due to the elimination of industrial jobs and the targeting of the majority African American neighborhoods for predatory mortgage lending resulting in 100,000 foreclosures after 2006.

The Moratorium NOW! Coalition to Stop Foreclosures, Evictions and Utility Shut-offs has waged a campaign for the last nine years to halt both mortgage and property tax foreclosures in Detroit and around the state of Michigan. Federal Hardest Hit Funds, the pittance of the Congressional bailout monies allocated ostensibly to the people in late 2008, are not being utilized in Detroit to keep working families in the neighborhoods. These resources are misallocated for demolition purposes through the Detroit Land Bank Authority (DLBA), a supposed quasi-public entity which is under Department of Justice investigation based upon its corrupt practices. The Duggan administration has pressured the Michigan State Housing Development Authority (MSHDA) to redirect all funds from the Hardest Hit program to demolition furthering the displacement of Black and working class people. (www.moratorium-mi.org)

A restructured K-12 educational system transforming the Detroit Public Schools into a Detroit Community School District has not resolved the deterioration which under state-control for more than a decade resulted in the closure of over 250 buildings and the elimination of thousands of employees. There are more for-profit charter schools providing largely sub-standard education to Detroit youth than the public system.

It is impossible to revitalize a municipality without quality education being available to the families living there. The majority of students attending charter and public schools come from households which fall below the poverty line.

Until the questions of housing, public transportation, education and water services are seriously addressed there cannot be a genuine reconstruction of the city of Detroit. As an edict of the Duggan administration’s policy, some 18,000 households are scheduled for the termination of their water services over the coming weeks.

The policy orientation of Duggan is weighed heavily in favor of the wealthy conglomerates controlled by the likes of Dan Gilbert, Roger Penske and the Ilitch family. The banks work in conjunction with the local capitalist class to perpetually disempower the African American majority.

This reality is mirrored across the U.S. where increasing amounts of the wealth of American society is utilized for the enrichment of the corporate elites. Only a redistribution of wealth and empowerment of the working and oppressed peoples will remedy the situation creating a viable system of living and governance in the urban areas.

Africa-China Relations Could Serve as Bulwark against Imperialist Hegemony