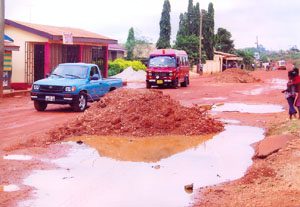 Encroachment on most public lands in Dormaa?Ahenkro has become an obstacle to the acquisition of land for major developmental projects. The phenomenon was not only peculiar to Dormaa-Ahenkro but the Dormaa Central Municipality in general, Mr. Gordon Asubonteng, the Municipal Chief Executive (MCE), has said.

Mr. Asubonteng made the observation in response to a question raised by an Assembly Member (AM) at an end of year general meeting of the Assembly on Friday at Dormaa-Ahenkro in the Brong-Ahafo Region.

The Assembly Member had alleged that there was no space at the old cemetery to bury the dead at Dormaa-Ahenkro, saying that was forcing people to exhume corpses in order to find space to bury their deceased relatives, apart from the cemetery extending into areas earmarked for residential accommodation.

The MCE said as a result of the difficulty in getting land, the Assembly had no option than to go to Atesikrom, a suburb of the Municipality to acquire a piece of land for the construction of a new slaughter house.

He appealed to the Municipal Town and Country Planning Department to take immediate steps to ensure that legal processes were adhered to and compensation duly paid to those owners, including farmers, whose lands were affected in the demarcation of the land for the new cemetery.

Mr. Asubonteng stated that with the new cemetery residents would be charged based on which side they wanted to bury their dead as it would be categorized into various portions with sections reserved for Very Important Persons(VIPs) to generate more revenue for the Assembly.

Mr. Kofi Beneabesi, Presiding Member, congratulated all the assembly members for their voluntary service to the country despite the numerous challenges which confronted them.