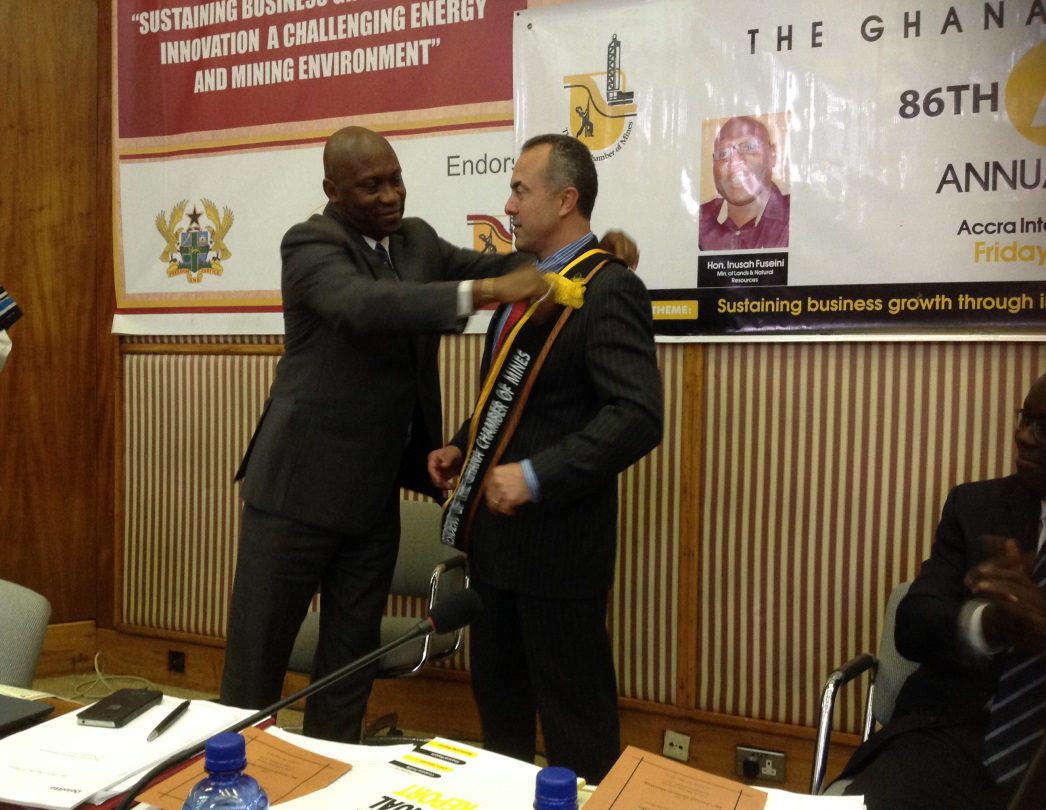 Mining communities across the country would continue to receive more support and provision of some basic social amenities and services from mining firms operating in those areas as part of their Corporate Social Responsibility (CSR).

The new president of the Ghana Chamber of Mines (GCM), Mr Johan Ferreira, has assured and added that his outfit would also continue to collaborate with government in bringing reforms to the mining sector by streamlining the activities of small-scale miners.

?Development of communities of mines is of importance to the Chamber, it (Chamber) would continue to make mining more meaningful to the government and communities?, he promised.
Mr. Ferreira gave the assurance last Friday at the 86th Annual General Meeting of the GCM under the theme ?Sustaining business growth through innovation in a challenging Energy and Mining Environment? during which he officially received the mantle of leadership from his predecessor, Mr. Dan Owiredu, to lead the Chamber for a two-year term.

On his part, Mr.Owiredu stated that even though the mining sector contributed 37.6 per cent of the total merchandise exports of Ghana in 2013 as against 43 per cent in 2012, it still continues to be the major source of foreign exchange for the growth of the economy.

?Also, producing member companies of the Chamber voluntarily invested US$12 million in a variety of projects that were intended to enhance the living conditions of their host communities. These included the construction of schools, potable water systems and clinics?, he added.

Mr. Owiredu , however, stated that the absence of an effective railway system has forced bulk mining companies such as Ghana Manganese Company and Ghana Bauxite Company to engage the services of road haulage transportation at an expensive cost which impacts negatively on their operations.

He appealed to government to consider the rehabilitation and construction of the railway network as a priority as part of the many projects to be financed by the dedicated infrastructure fund it promised the 2.5 increment in VAT would be allotted for.

The Chairman of the Parliamentary Select Committee on Mines and Energy, Mr. Kwabena Donkor, admonished the mining companies to abide by the regulations in the mining sector.

He expressed reservations about the operations of Newmont Akyem, describing it as an affront to parliament and the laws of the country since their lease agreement for operation is yet to come to the House for approval.
?They are not supposed to start operations, there are a lot of mining companies doing that?, he fumed and added that parliament can only become an advocate for the mining industry until they (mining companies) operated within the framework of the country?s laws.

Mr. Donkor also charged members of the GCM not to only focus on local content creation but also add value to the minerals exploited here instead of exporting them in their raw states.