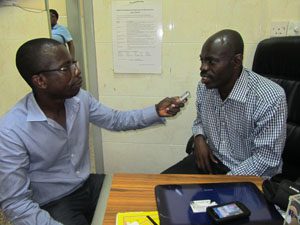 FOR MOST parents and guardians in Ghana, one of the commonest dangerous or dreadful child-related diseases is malaria. But some medical officers at the Komfo Anokye Teaching Hospital (KATH) in Kumasi think otherwise.

Specialists say there are other more serious diseases which are destroying Ghanaian children currently than malaria. One of such severe diseases which the health officials think Ghanaians must be informed and educated about is diabetes in children.

Speaking in an exclusive interview with DAILY GUIDE, Dr Emmanuel Ameyaw, paediatric endocrinologist at KATH said, ?Diabetes in children is due to auto immune destruction of the beta cells.

?The beta cells are part of the pancreas that secrets insulin. We all need insulin for metabolism of carbohydrates, protein, fats and oil. So, it is like all the food substances that we eat, insulin is needed for their utilization in the body.?

But the problem with children with diabetes is that their beta cells have been destroyed, making it difficult for them to produce sufficient insulin for metabolism to take place.

Causes of Diabetes in Children

Dr Ameyaw said genetic, maternal nutrition during pregnancy and environmental triggers such as infection usually viral infection were some of the factors that destroy the beta cells resulting in diabetes in children.

With the genetic factor, the medical doctor pointed out that the child inherits the condition from his biological parents making the child prone to getting diabetes.

?For example, if the mother does not get certain nutrients during pregnancy and gives birth, after some time, the child becomes genetically susceptible to diabetes,? he said.

?Again, early exposure of the child to cow milk is a problem. You see, cow milk stimulates the immune system and after some time it can fight against the beta cells and destroy them, making the child disposed to the disease,? the medic opined.

He appealed to nursing mothers to breastfeed their babies until they reach six months or at least four months period, considering the inexpensiveness of breast milk and its ability to protect the children against diseases.

Environmental toxins often produced by rodenticides, insecticides is another factor the paediatric endocrinologist warned parents and guardians to be wary about.

According to him, some of those products contained chemicals that specifically destroyed the beta cells of the pancreas.

He said even though people could not do away with insecticides and environmental toxins, they should as much as possible keep them away from the reach of children and let their effect go down.

?For example, when you spray your room you need to let the effects go down before you allow the children in because even apart from getting diabetes, you also prone them to getting kidney and other organ-related problems as some of the chemicals contain heavy metal that deposit in them.?

In the opinion of Dr Ameyaw, children suffering from diabetes may show varied clinical features including frequent visits to the toilet, frequent passing of urine and excessive drinking of water.

In most cases, he said, ?The child?s urine might contain food substances that the child has eaten like carbohydrate, protein, fats and oil.

?Even though the child eats a lot, he gets wasted as he does not put on weight because he discharges the food he had eaten through urination.?

For such children, the paediatric endocrinologist noted that they wet their beds while even those above five years who manage to refrain from wetting their beds frequent the washroom to pass urine.

Similarly, children with diabetes suffer from exaggerated tinea infections and boils, called furunculosis. You see the infections in excess.

?When they get ulcers or sores that should be treated and healed in a few days, you see that it takes a longer period or it may not heal over a long period of time.?

The specialist warned that if parents and guardians overlook all these signs the child?s condition may develop into Diabetes Katoacidosis (KDA).

?At this point, as the child urinates the food substances out, the body is forced to use the fats and other substances, making the child acidotic, a condition which makes him feel like vomiting.

?The child may also suffer nausea, abdominal pain, and later labored respiration (difficulty in breathing) as if he has pneumonia,? the KATH medical officer said.