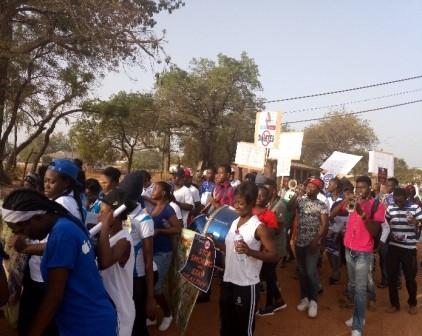 Mr Innocent Braimah, a Dietician at the Upper East Regional Hospital in Bolgatanga, has called on health professionals to educate the public on diabetes because the disease has become the main cause of deaths in the area.

He said diabetes was among the four top chronic diseases and was fast gaining grounds in the Region, especially among young people.

Mr Braimah said this during a health talk which brought together health professionals, bankers, security personnel and students from the Bolgatanga Nurses and Midwifery Training Colleges.

The participants earlier danced to brass band music through the principal streets of Bolgatanga carrying placards some of which read “diabetes is a killer”, “check for your status”, “more exercise and good diet”; as part of activities to mark this year’s World Diabetes Day celebration.

The month long celebration which is being held under the theme; “Preventing and managing diabetes, the role of diet and lifestyle,” comes with activities such as radio discussions on “effective diabetes management, health talk in churches, mosques, corporate and educational institutions as well as screening for diabetes.

He said even though there were signs and symptoms of diabetes “you cannot be sure whether you have Type 1 or 2 diabetes until you check. It is a very easy and affordable test, lets encourage everyone to check,” he said.

Dr Bertha Gibil, a Medical Officer at the Hospital, said there were three types of diabetes including, Type 1, 2 and gestational diabetes.

She said Type 1 diabetes was genetic and usually detected during childhood as the pancreas most likely does not produce insulin and in that case nothing could be done about it.

Dr Gibil said the emphasis was on the Type 2 form of diabetes which is preventable and not insulin dependent, as insulin was produced but the body does not recognize it, or it was too little to be recognized.

She said with the gestational and Type 1 forms of diabetes, nothing could be done about them, “the only thing about the gestational one is that if you get it in pregnancy, the likelihood that you will get the Type 2 along the line is very high.”

She impressed on the general public to exercise regularly avoid eating late at night, eat three or four hours before going to bed.