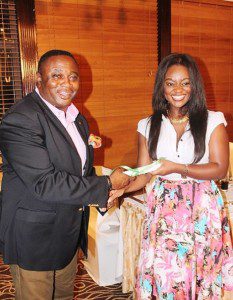 Minister for Youth and Sports and Jackie Appiah Cup

Ghana?s ex-sports minister Elvis Afriyie-Ankrah has threatened legal action following accusation of him bedding a Ghanaian actress at the 2014 World Cup vehemently denying that he was engaged in a sex scandal.

However, the former Minister who hired the ambassadors purposely to raise funds for the Black Stars described as ?stupid? for someone to think he engaged in such an act.

According to him, though he airlifted the ambassadors to Brazil he never set eyes on Jackie and same as Becca who was also accused of having sexual intercourse with Black Stars midfielder, Agyemang Badu.

?I have heard all kinds of stories and it?s incredible. The only time I went to the ambassadors? hotel, I went with two of my colleagues and it was the old footballers who were there [at the hotel]. The female ambassadors and John Dumelo had gone to town.

??For the entire period we have been in Brazil till now, I have not set my eyes on these female ambassadors [Jackie and Becca]?not even ones. I did not see them, not even ones,? he said in an interview with Paul Adom-Okyere on Metro TV.

Adding that, ?I was with my wife and two kids in Brazil. So how could I disrespect her? Assuming she [wife] was not with me and hearing all these stories?though she believes in me but she is human. I did not set eyes on them [Jackie and Becca]?. Not from a distance?I don?t have their numbers, both local and Brazil. I have never spoken to them before. Why would someone manufacture a story like that to the extent that they claim they have a tape? This is beyond foolishness?.

Speaking on Metro TV?s Good Evening Ghana, Elvis Afriyie Ankrah opined that photograph circulating of him, Jackie, Becca and Dumelo allegedly to be having some fun in Brazil at a beach is a total fabrication.

?We took that picture at the Labadi beach in Accra when I appointed them as ambassadors,? he said.

He also rubbished claims that Becca spent a night time with Emmanuel Agyemang Badu in his hotel room.

?The ambassadors never came near the team. FIFA security did not allow anyone without accreditation to get closer near the player, not even in their hotel,? Afriyie said.

?Even me, I struggled in some point in time to get closer to the team. So how could Becca spend the night with Agyemang Badu in his hotel room while she doesn?t have an accreditation?? he questioned.

Elvis hinted that, he will soon take legal actions against the indicters.

?This is absolutely not right,? Afriyie fumed.