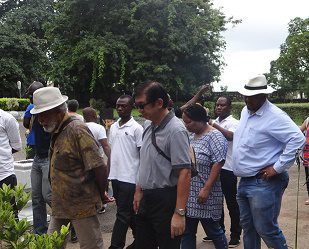 The Ministry of Tourism, Culture and Creative Arts in collaboration with the Foreign Affairs Ministry has organized a familiarisation tour for some members of the Diplomatic Community to some tourist sites in the country.

The three-day tour was to expose Ghana?s tourism products to the various representatives of countries in Ghana, and to help promote and market Destination Ghana to their respective countries.

A statement issued in Accra by Mr Kojo Bentum-Williams, of the Corporate Affairs Department, Ghana Tourism Authority, said the tour formed part of the ?Explore Ghana? Project launched by the Ministry to promote domestic tourism.

It said the tour took the envoys to the Lake Bosumtwi, Bonwire and Ntonso craft villages, Kumasi Cultural Centre, the Military Museum, the Okomfo Anokye Sword, and the Manhyia Palace Museum.

The statement said the event was climaxed with a special delegation led by Mrs. Elizabeth Ofosu-Adjare, the Minister of Tourism, Culture and Creative Arts to the Akwasidae Cultural Festival at the Manhyia Palace.

It said the Minister took the opportunity to introduce the various heads of missions to the Asantehene.