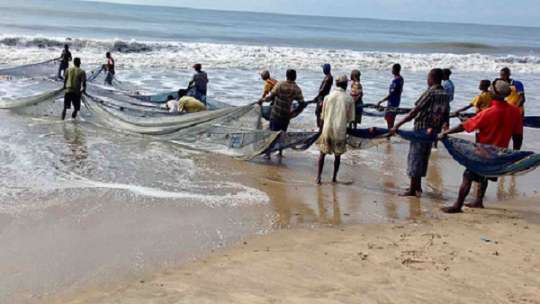 Mr Richster Nii Amarh Amarfio, a Fisheries Advocate, has called on Ghanaians to respect the environment, including the sea, as the wanton disregard for the environment was killing fishes in Ghana’s water bodies.

Mr Amarfio said the treatment of the country’s water bodies was negatively affecting aquatic life, stressing that “if you can’t drink that water, know that the fish in it will die.”

He was speaking at the sixth edition of the Ghana News Agency monthly stakeholder engagement which is aimed at providing the needed platform for both state and non-state actors to deliberate on national issues.

Mr Amarfio, who is also the Secretary of the Ghana Tuna Association, said there was a relationship between marine life and clean water, noting that now that the various mangroves that provided a safe place for fishes to lay their eggs to replenish were all gone, a situation contributing to the depletion of the country’s fish stock.

He said if the country’s water bodies were clean and could support aquatic life, the dependent on fish from the sea would not be too overbearing.

He said Ghana consumed between 22 to 27 kilogrammes of fish per capita which was higher than the eleven and 13 kilogrammes per capita average for Africa and the world respectively.

He said about one million metric tonnes of fish was consumed in Ghana per annum, which he disclosed the country’s fisheries sector could not meet, leading to an imbalance between supply and demand situation, which had led to the importation of fish to fill the gap.

He observed that such a gap could have been taken care of with fishes from other water bodies in the country if not for their contamination due to the disregard for proper environmental practices.

“Now everyone is relying on the ocean because inshore fishing can’t be done in the rivers such as Pra, Ankobra and the rest, our fishing industry is not resilient, it is collapsing,” he said.

Mr Amarfio said activities such as illegal mining and the discharge of untreated solid and industrial waste into the water bodies were killing the fish.

According to him, no district assembly, including the Tema Metropolitan Assembly, which has a lot of industries in its jurisdiction could point to a central treatment plant to treat effluents and household waste before releasing them into the water bodies.

“The TMA does not have a treatment plant, all the drains end up in the Chemu lagoon and that is what is happening in other districts,” he bemoaned, adding that “we build industries without waste treatment and then they channel their waste into water bodies and destroy them.”

Mr Francis Ameyibor, the Ghana News Agency, Tema Regional Manager, said that the stakeholder engagement, which comes on the last Wednesday of every month, was a progressive media platform to allow both state and non-state stakeholders to interact with journalists and address national issues.

He said modern journalism practices demanded a comprehensive dynamic approach to issues, which affected society, through which the media must provide a platform for proactive engagement and exchange of ideas towards shaping national development.

He said: “We have progressed from docile journalistic practices where media practitioners depend solely on projecting agenda set by others. Journalists cannot claim to be agenda setters when they are only mirroring what someone wants them to project.”