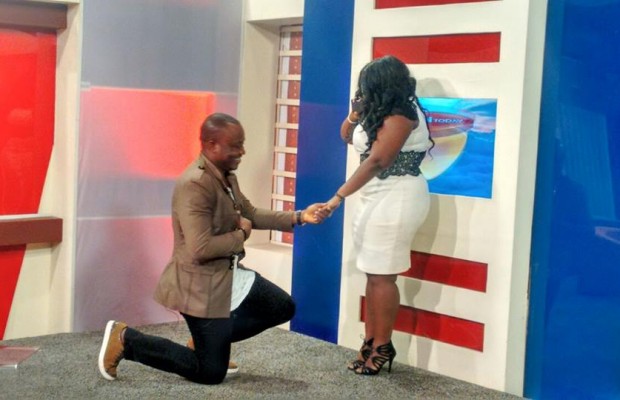 Ghanaian comedian DKB has said rumours of his girlfriend parting ways with him as a result of an ‘expensive’ April fool prank on Friday are untrue. According to him, their relationship is intact.

The ex-BBA star on April Fool’s Day proposed marriage to Ghone TV presenter AJ Sarpong in a live television broadcast and presented her with an emerald ring.
She accepted his proposal and amidst tears of joy, gave him a kiss.

DKB crowned it all by posting pictures of them on his social media with the caption, “she said yes! Glad we made it public now. I love you very much. Oya chop kiss.”

Social media went buzzing with adorable congratulatory messages, even though a few people had doubts.

But DKB returned Friday night to say it was all an April fool prank.
“I want to thank Ghanaians and the general public for believing and trusting that I’m capable of showing a soft side via proposing to AJ on live TV. I’m really overwhelmed by the love from your messages and best wishes.

‘‘To be honest, with the affable response I have received, I deeply wish it were true. Once again, I am really grateful for the love and support from my fans plus apologies to those who will be disappointed with this news. Don’t worry; it’s all fun #Vimyaazo,” he added.

He told Ghanareporter.com that he and his girlfriend were doing perfectly well. She was aware of the prank, he revealed, saying, “I informed her.”