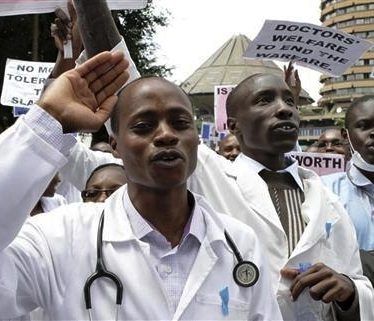 Hospital, has added his voice to calls by Ghanaians to the

striking doctors return to work and save precious lives. He said by the nature of their profession, doctors

had sworn an oath to save lives, therefore they would be doing a

between them and government they allowed patients to die.

Dr Khan made the call through the Press at Agona

He made a passionate appeal to the government to use

a diplomatic approach to resolve the matter to prevent further

According to Dr Khan, who is also a missionary and

expatriate, the doctors’ strike had exerted incessant pressure on

mission hospitals, and therefore appealed to them to return to

A number of important personalities, including

others, have appealed to the doctors to consider the plight of

He appealed to the Ministry of Health and the Ghana

hospitals to enable them cope with the on- going pressure at

He said doctors by their profession did not rest,

sleep and travel without tangible reasons, all in the interest of

patients, and therefore urged government to deal leniently with

Dr Khan said the strike action could affect the

financial positions of private and mission hospitals, and could

delay the payment of monies in respect of the National Health

Alhmadiyya Hospital, asked the government to expedite action on

negotiations on the doctors’ demands, to enable them return to

He urged the central government and other Non-

equipment and other logistics to enhance health delivery.