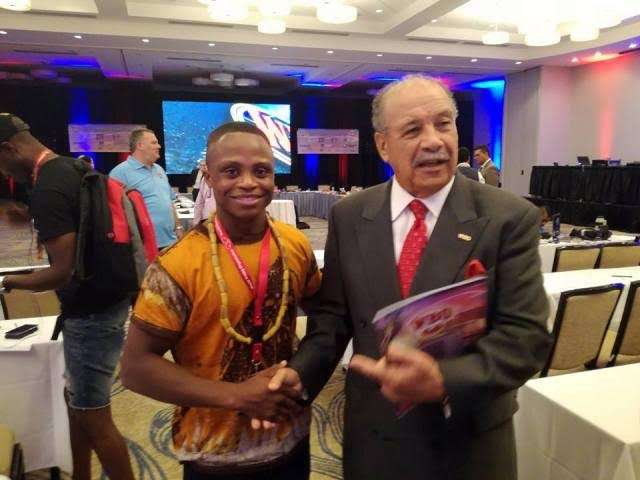 Undefeated Ghanaian Featherweight, Isaac ‘Royal Storm’ Dogboe has landed in Puerto Rico with his trainer/dad, Paul Dogboe to attend the 2016 WBO Convention where the budding boxer will be officially recognized as the WBO African boxer of the year.

Dogboe will receive his award alongside legendary Filipino, Manny Pacquiao who has been named the WBO boxer of the year as well as Top Rank Promotions CEO, Bob Arum who gets the nod as promoter of the year and New Zealand heavyweight, Joseph Parker, the Oriental boxer of the year.

The 22 year old Dogboe (now 15-0, 9 KOs) thrice defended the WBO Africa Featherweight belt he won at the end of 2015 and has also added the WBO Oriental as well as the WBC Youth Silver belts, both at Featherweight to his collection in the year under the review.

After clinching the WBO Africa belt with a round 8 stoppage of compatriot, George Krampah at the Accra Sports Stadium on December 26 last year, young Dogboe made a successful defence via a unanimous decision over another Ghanaian, Michael Pappoe at the Azumah Nelson Sports Complex, also in Accra on February 20.

Four months later, Dogboe stepped up to the challenge of hitherto undefeated Ugandan, Edward Kakembo who was the Africa Boxing Union (ABU) featherweight champion. A completely dominant and one-sided show at the Accra Sports Stadium saw ‘Royal Storm’ stop the tough talking Kakembo in round 6.

As a result, the Ghanaian has risen to number nine featherweight in the latest WBO world ratings and is bidding for a final world title eliminator before the end of the year which no doubt is enhance with his imminent coronation as Africa’s best boxer during the October 17 to 21 WBO Convention.