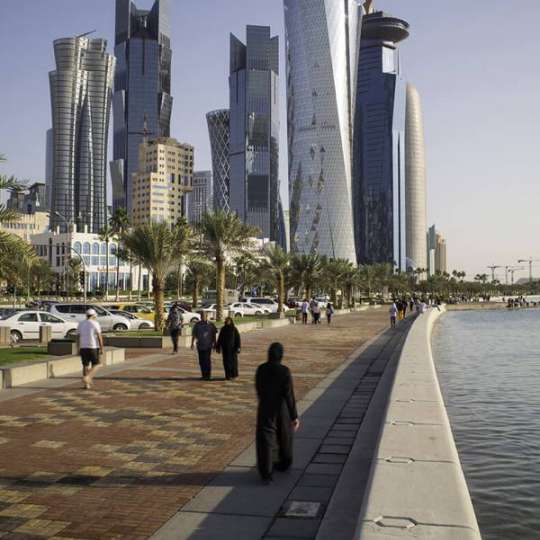 All around the globe today, issues about development keep changing by the passing of each day. It is therefore important for nations to study the dynamics and make the necessary decisions and changes that will meet the needs of their people as far as their developmental requirements are concerned.

It is in the light of this, that the Government of Qatar has taken upon itself the responsibility of organising annual forum, to look at the world perspective in terms of development where experts converge to brainstorm and come out with ideas to shape the world and position the individual countries to live in peace and forge ahead with their development plans for the benefit of their nationals.

The 2018 forum was held in Doha, Qatar’s national capital, and attended by experts – academia, world business community and policy makers.

The forum, the 18th in the series, focussed on four essential sub-themes – Security, Peace and Mediation, Economic Development, Trends and Transitions.

Speakers at last year’s event made a case for the strengthening of efforts towards building peaceful co -existence among nations by deliberating on issues relating to the promotion of free speech, dialoguing, building bridges of peace and forging alliances.

Speakers at the two-day meeting, which was on the theme: “Shaping policy in an interconnected world”, were unanimous in their view that the world would be a better place for its people if leaders embraced dialogue to build bridges, resolve challenges as well as crisis in the interest of all instead going to war.

United Nations (UN) Secretary General, Antonio Guterres, said the world faced enormous challenges that could not be solved by any country on its own.

He mentioned climate change, migration and refugees, the multiplication of conflicts that were increasingly interlinked, international criminalities and the impact of new technologies and said they were difficult to manage in all dimensions.

“We need global responses to global challenges”, he added.

Mr. Guterres called for new forms of cooperation among countries, international and regional organizations, a networked multilateralism and closer links with civil society and other stakeholders to resolve challenges.

“The world is more connected, yet societies are becoming more fragmented. Challenges are growing outward, while many people are turning inward”, he noted.

The UN Chief expressed concern about the “uneven economic growth that has left many people and communities behind, stagnant or declining real per capita incomes, escalating trade disputes, rising debt, an undercurrent of geopolitical tensions adding further pressure to the global economy and perhaps above all, rising inequalities that undermines stability and social cohesion”.

“All of this underscores the need for a fair globalization to reach Sustainable Development.

“We need to work together – we can achieve great things for the good of all people, because international cooperation works and that cooperation, has never been more critical to repair broken trust and uphold dignity for one and all.”

“These alliances need to be revisited not just by the big countries and superpowers but also by member states of the United Nations (UN) as well as the various regional blocks”, to foster peaceful co-existence, he added.

Madam Maria Fernanda Espinosa, President of the UN General Assembly, expressed concern about the emerging crisis at various levels, both regional and international, which she said was fuelling the challenges in the global political climate.

“Security is at the heart of the UN system”, she said, “however the international community has failed to abide by the governing principles of the world body”, she added, and called for the commitment of member states to make the rules work.

“We cannot achieve much if we put aside the peace and mediation efforts needed to address the pressing issues affecting the global community, according to Madam Espinosa.

“There should also be a resolve to build a world that will ensure a peaceful co-existence, sustainable development and the equitable distribution of it resources.”

Madam Espinosa said since women were naturally peacemakers, they should be included in mediation and peace building efforts to reach intended goals at all levels.

She applauded the organising team for considering the interest of the youth in this year’s agenda by holding a youth forum ahead of the main event.

An interesting aspect for Ghana was the announcement that Qatar Airways, the national airline of Qatar, would be flying to Ghana this year.

“We have already gone far with talks with the Aviation Authorities in Ghana and will be flying to that country by middle of 2019”, Abkar Al-Baker, the Group Chief Executive Officer of the Airline, told journalists.

Akbar Al Baker said though the initial negotiations with Ghana bordered on the need for his country’s assistance to run a national airline for Ghana, Qatar planned to make Ghana one of its destinations, from next year, to begin with, while further discussions continued.

According to him, Qatar Airways has targeted to add 15 new destinations to its network, next year, and to also procure 36 new aircrafts for that purpose.

Beaming with smiles and backed by the confidence of his government, Akbar Al Baker was optimistic that the projections of the airline would be achieved, and said the “blockade on Qatar has failed to stop the growth of Qatar Airways”.

The blockade did not have a toll on the airline because “we quickly developed new routes and though 18 routes were blocked, they were replaced with 24 destinations in Europe, Africa and Russia”.

“The destinations have now increased to 30 and we are still searching and networking to reach our target of 250 destinations as planned and also to send the message to the world that we will keep on marching forward and nothing will stop us.”

He said African countries including Ghana were underserved but had huge potential and therefore Qatar Airways was looking at Africa in a positive way by giving incentives to new entrants and other assistance to those who wanted to do business with Qatar.

“The world will see the rapid progression of Qatar Airways as we have lined up more than 15 destinations to be announced step by step, while we wait for airport slots”, he said, adding that, the 36 new aircrafts would be received in the next 12 months.

The world stands to benefit a lot in diverse ways if the recommendation and conclusions reached at the meeting are adopted at various levels.

In addition, leaders who find the need to tap into the recommendations would get a wide range of ideas and interventions that would help them upscale their forward march into peace and development.

The clarion call is for the individual countries to work hard to make their systems work both economically and socially to benefit their people.