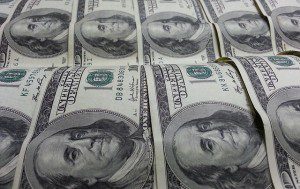 Fed funds futures rates show investors see around a 40 percent chance the Fed will raise rates by its December meeting, according to CME Group’s FedWatch tool, compared with less than 20 percent a few weeks ago.

The dollar index, which tracks the greenback against a basket of six major rivals, hit a high of 97.271 .DXY, its highest level since March 10.

The dollar rose 0.1 percent against the yen to 106.20 yen JPY=, after hitting 106.53 yen on Tuesday, its highest level since June 24 when markets were shaken by Britain’s surprise vote to exit the European Union.
“The dollar is now being supported by rising U.S. rate expectations. The likelihood of a Fed rate hike before the end of the year that is being priced in by the markets has almost returned to the levels seen before the EU referendum,” said Thu Lan Nguyen, currency strategist at Commerzbank.

“Most recently the rising rate hike expectations are mainly due to better economic and inflation developments in the US.”

Speculators have also been unwinding their safe-haven bids in the yen as the initial shocks from the Brexit vote dissipated, and expectations rose of additional easing from the Bank of Japan at its July 28-29 meeting.

A majority of economists polled by Reuters expect further BOJ easing, which is likely to consist of a combination of measures.

Japanese policymakers are unlikely to go as far as funding government spending through direct debt monetization, or “helicopter money” but might pursue a mix of aggressive fiscal and monetary expansion to battle deflation, according to sources.

“If the BOJ doesn’t take any action, the dollar/yen can fall back to 100 again,” said Kaneo Ogino, director at foreign exchange research firm Global-info Co in Tokyo. “But now the focus has also shifted to the possibility of a U.S. interest hike,” he said, which will likely underpin the dollar even in the event the BOJ decides not to ease this month.

The dollar’s rise saw the euro EUR= shed 0.3 percent to trade at $1.10985, its lowest since June 27. The European Central Bank will hold a regular policy meeting on Thursday, its last before an eight-week summer break.

It is not expected to take any additional easing steps but could sound a dovish tone.