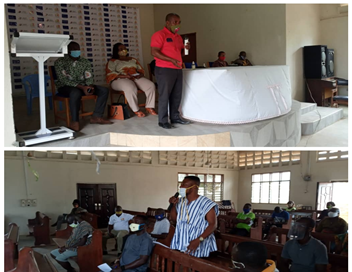 This, came to light at a Social Auditing forum organized by the Fanteakwa South District Secretariat of the National Commission for Civic Education(NCCE) on the theme, ‘Citizens for Transparency and Accountability’ at Dome-Hemang in the Eastern Region.
The forum was to promote community ownership of developmental projects and policies.

Speaking at the forum, Mr Kwadwo Adu- Asare, the District Director of the NCCE, said the programme, supported by the European Union (EU) was to create awareness of the operations of the Local government and to empower the citizenry to demand accountability from duty bearers.

Mr Adu-Asare explained that social auditing was not for fault finding, but to draw the people closer to their leaders to ensure accountability and transparency in the handling of community funds and projects.

Mr Augustine M. Bosrotsi, the Deputy Eastern Regional Director of NCCE explained that social auditing was not an event but a process towards achieving results and briefed the committee on the use of petition and lobbying in seeking support from the assembly or duty bearers.

Mr Samuel Asenso Okyere, the Assembly Member of Dome-Hemang Electoral Area applauded the NCCE and the European Union for such a great engagement, which had enabled the people to contribute to prioritize the needs of the community.