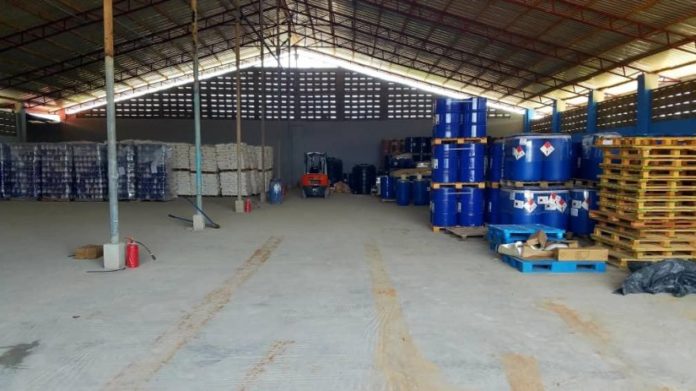 A multi-million dollar paint manufacturing company stands ready to add to the economy of the Ho West District in the Volta Region.

Some ten minutes’ drive from the Regional capital, Ho, the imposing facility situated at the beginning of the last stretch of the Accra to Ho highway at Tsawoenu is set to become the first major producer of a range of common commodities in the enclave.

High demand for paint products in Volta and Oti Regions makes it a lucrative industry with a supply chain that will benefit many.

Mr Steven Adom, Chief Executive Officer (CEO) of the Company, not long ago, was himself churning out about 2,000 litres of paints a day in a small shed using locally fabricated machinery.

In June 2020; about a year and a half later, Dominion Paints Manufacturing Industries will begin production of some 40,000 litres every 24 hours, and make a market debut with a total of eleven paints and coating products under the brand name Agatex.

Mr Adom said partnership with investment company, Quick Angels, which provided millions of cedis to expand his dream of a major industry was yielding great results.

He said the support encouraged extra investments into developing products of international quality that would be made available at highly affordable prices.

The CEO said though Government’s flagship One District One Factory spurned him, he was unable to attract that support.

“I went to the banks and told them my project is under the 1D1F, but I was told it made no difference. I chased them all over the place but received no support.

“Quick Angels took interest and provided the funding. They caused the project to be expanded, increased mixing and milling machinery,” he said.

Mr Adom told the Ghana News Agency (GNA) that the Company had scheduled to begin production in January 2020, but delays in shipment of production and packaging materials changed the timetable.

“Ho West local economy will be transformed. We have already employed many people from the communities,” he said, adding that major distributors had expressed interest in the products, with offices in neighboring Togo, and Benin to serve clients in those countries.

The CEO said the factory, sited on a five-acre land, had an advanced wastewater recycling system that would save the natural environment including water bodies from chemical pollution.

Mr Kwame Azumah, Senior Business Personnel with the National Board for Small Scale Industries, said the factory would put the Volta Region on international charts through the production of quality paints.

He said the availability of local production inputs guaranteed the local economy more gains from industralisation, and that stakeholders must work to cut the import of raw materials, which were in abundance in the country.

“The red clay in the Tongu Districts is the best in the world. The Anfoe areas have materials for producing paint and there are oyster shells along the coast,” he stated.

Mr Azumah said Government must cement the relationship between industry and academia, to accelerate the research and development of extraction and processing industries.

“…The development of local industries requires strategic alliances among Government, academia and industries,” he stated.

He said the presence of Dominion Paints would encourage more industries to spring up in the enclave, and charged the local Assembly to empower local entrepreneurs to tap into the opportunities.

“Vocational training must be prioritized, and Government, the assemblies must continue to provide the necessary infrastructure including transport lines and irrigation dams to move the local economy forward,” Mr Azumah said.

Agatex product range will include acrylic, emulsion, and gloss paints, solvents, sealants, putty, glue, varnish, and wood stains, with the production of tile cement planned to begin about a year later.

GNA was told the Company would create about 100 skilled job opportunities and has the capacity to expand into an industrial cluster.

Mr Ernest Appau, Ho West District Chief Executive, said the establishment of the Company in the District was a blessing.

He said the Assembly was working closely with the owners so it could open up the District for rapid development.

“We are happy with what is happening. This Company will create jobs and help groom other local initiatives to grow the local economy and enhance our image,” the DCE said.

Mr Appau said the Assembly had acquired large tracts of land for two other companies to set up under 1D1F.

Ho West District was curved out of the Ho Municipality in January 2012 and inaugurated in June; 2013 with Dzolokpuita as its capital.

The District is full of opportunities in agriculture, commerce and tourism with about 69.5 percent of the population aged 15 years and older being economically active while 30.5 per cent economically inactive.