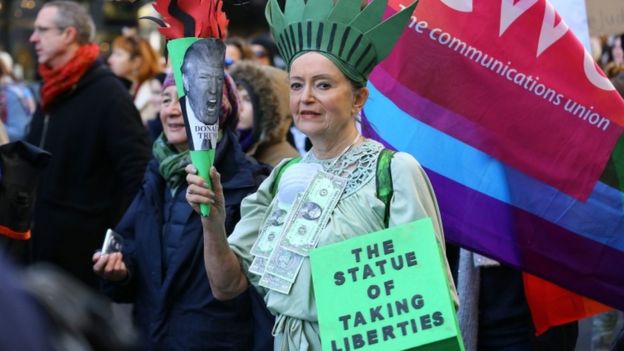 Hundreds of thousands are gathering for a “Women’s March on Washington”, part of a global day of protests against new US President Donald Trump.

The rally is one of more than 600 expected worldwide on the president’s first full day in office.

The aim is to highlight women’s rights, which protesters believe to be under threat from the new administration.

On Saturday morning, protesters swarmed streets and metro stations in the US capital, heading for the National Mall, where speeches have started ahead of an afternoon march to the White House.

Organisers had originally sought a permit for 200,000 people but say they now expect as many as half a million, possibly dwarfing Friday’s inauguration crowd, the Washington Post reported.

But there will be other protests in some 300 cities across the US, from New York to Seattle.

California participant Jessica Vroman posted an image of a flight to Washington packed with women. “This is what hope looks like people!” she wrote.

Many women have knitted pink “pussy hats” – a reference to a recording that emerged during the election campaign on which Mr Trump talked about groping women.

Placards in Washington read: “Women won’t back down” and “Less fear more love”.

Organisers of the Washington march said in a statement: “The rhetoric of the past election cycle has insulted, demonised, and threatened many of us.

“The women’s march on Washington will send a bold message to our new government on their first day in office, and to the world that women’s rights are human rights.” Image copyrightEPA
A protester spells out her message in Bangkok, Thailand

They said the protest would not simply be about women’s rights and would attract “people of all genders, ages, races, cultures, political affiliations and backgrounds”, with support from the likes of Amnesty International.

Authorities will be on standby to prevent any repeat of violence that occurred after the inauguration ceremony on Friday, when protesters smashes windows. More than 200 were arrested and six officers hurt.

‘These are global problems’

Anti-Trump marches have already taken place in Australia, New Zealand and in Asian cities such as Bangkok.

Several thousand women and men joined a rally in central Sydney, with a similar number in Melbourne.

American expatriate Bill Scholer, protesting in Tokyo, told Reuters news agency: “Everything we value could be gone. It’s time to speak your mind and concerns and to do our best to salvage the values we cherish in America.”

Thousands of people are taking part in protests in cities across the UK,including London, Belfast, Cardiff, Edinburgh, Leeds, Liverpool, Manchester and Bristol.

Eleanor Hallam, 26, said she was at the London march “out of solidarity for all the women and other groups marginalised by Trump’s politics”.

Mr Trump is now attending a multi-faith service at Washington National Cathedral. It was said to be his sole official engagement on Saturday, although it has been announced he will visit the CIA in the afternoon. But he has already ordered agencies to ease the “economic burden” of the health laws known as Obamacare.

Critics point out that it makes no mention of civil rights, LGBT rights, healthcare or climate change.

In Friday’s inaugural address, Mr Trump pledged: “From this moment on, it’s going to be America First. We will follow two simple rules: Buy American and hire American.

“Every decision on trade, on taxes, on immigration, on foreign affairs, will be made to benefit American workers and American families.”