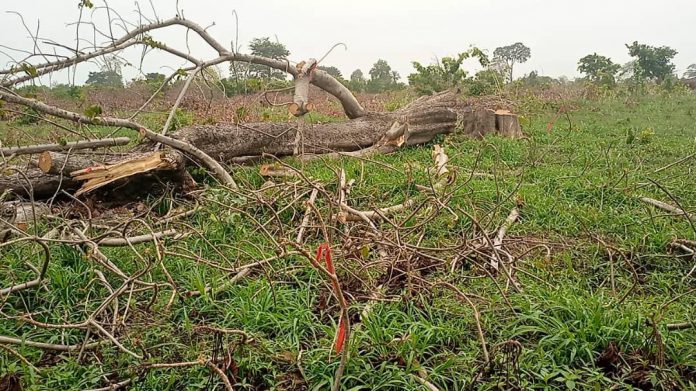 The Chiefs and People of the Donkro-Nkwanta community in the Nkoranza traditional area in the Bono East Region have appealed to Regional Minister to help them retrieve 1,500 hectares of farm lands from a private company.

Nana Owusu Akaw Brempong II, Divisional Chief of the area stated that Mr and Mrs Danquah, Chief Executive Officers (CEO) of a private company, and residents of the United States bought the over 2.5 kilometers square land belonging to about 500 farmers in the community for mining activities.

The chief made the appeal when the Bono East Regional Minister Mr Kwesi Adu Gyan and his entourage paid a courtesy call on him at the chief’s palace at Nkoranza.

Nana Brempong II lamented that the Company bought the land from the paramount queen mother of the traditional area without knowing the land was going to be used for mining purposes.

He said the situation has been dire to the entire community since they have lost their farms which were their source of livelihood.

One of the affected farmers Madam Hawa Bawa, a single mother with four children could not hide her tears and told the GNA that the company has destroyed her cashew farm which was the only source of income to the family.

.
The Minister urged the youth and farm owners to remain calm as his office and the relevant stakeholders find ways of addressing the issue amicably to ensure peace in the area.

He promised to promote farming activities in the region to be able to grow raw materials that could feed factories in and outside the region.