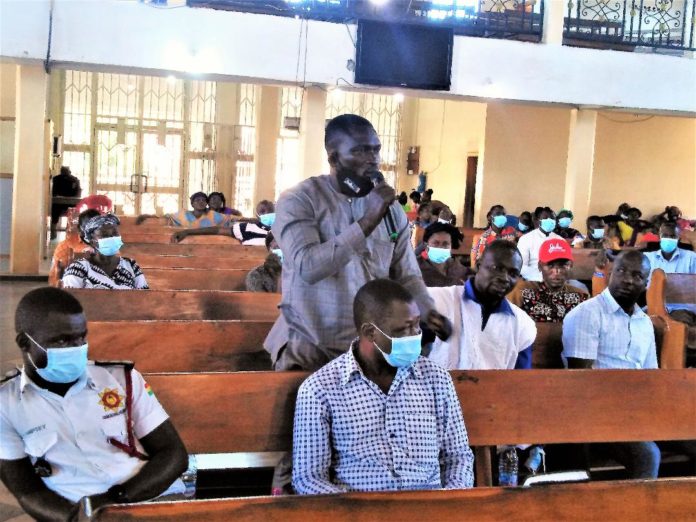 Mr Kennedy Atiibo Ayatah, the Acting Ahafo Regional Executive Secretary of the National Peace Council (NPC), has called on the youth in ‘hotspots communities’ not to de-value themselves and allow political parties to use them as tools to cause political violence before, during and after Election 2020.

He reminded the youth that vigilantism and related activities had been outlawed in the country, saying any youth who allowed politicians to use him or her for such politiical violent activities would face the consequences.

In an interview with the Ghana News Agency (GNA) on the side-lines of a dialogue session, held at Goaso, Mr Ayatah advised the youth to instead, served as peace ambassadors and guard against behaviours that could trigger political violence and disturb the prevailing peace of the nation.

The NPC in collaboration with Ashesi University, with support from Commonwealth organised the two-day meeting, which was attended by 35 youth groups in the Region.

As a new region, Mr Ayatah noted peace was required to give Ahafo strong footings to facilitate rapid socio-economic development saying “if the search for peace is not achieved, all other efforts will not lead to anything”.

“So, peace is a central development requirement and human development indicator, that should not be undermine at all,” he added.

Mr Ayatah indicated that the youth who were the future leaders of the country had been actively involved in political activities since 1960 with accompanying conflicts that often threatened the peace architecture of the nation.

Their youthful exuberance ad eagerness to participate in decision making activities that affected them, make them prone to being manipulated by older people and some politicians to their advantage to cause mayhem in the country.

Despite all these, Mr Ayatah expressed regret that the focus on conflict prevention in the country had been mainly on equipping traditional, religious and community leaders, and professional bodies in promoting non-violence to the neglect of youth associations who had become vulnerable to violent vigilante activities.

He therefore called on leadership of the various political parties to be sincere to the people they sought to govern saying, “if you use violence to acquire political power, it would not bring any development to the people”.

Mr Ayatah reminded the youth that they were rather going to suffer consequences of any post-election violence, hence the need for them to be mindful and appreciate the country’s prevailing peace.

Dr Enyonam C. Kudonoo, a Senior Lecturer, Ashesi University, and a facilitator told the youth they had potentials in them and so they should not engage in political violence that would ruin their future.