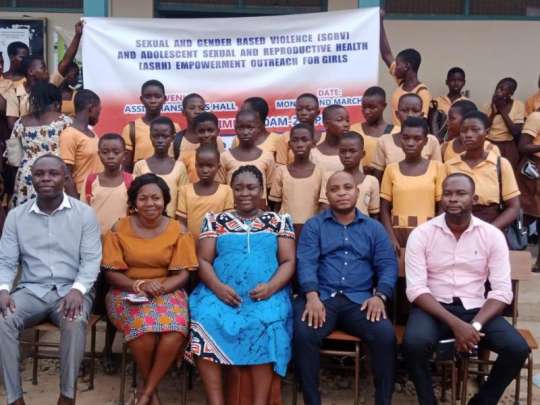 The Assin South Directorate of the Ghana Education Service (GES) has cautioned adolescent girls to refrain from running errands at homes of male teachers to avoid incidents of sexual abuse, harassment, and defilement perpetrated by some teachers.

It said sexual and gender based violence(SGBV)and adolescent pregnancy were serious abuses impeding the health, education, social and economic development of both adolescent girls and their families.

The meeting organised by the Department of Gender in collaboration with the Central Regional Coordinating Council (CRCC) was supported by the United Nations Population Funds (UNFPA).

It was on the theme: “Sexual and Gender Based Violence (SGBV) and Adolescent Sexual and Reproductive Health (ASRH) empowerment outreach for girls”.

The Director noted that girls have great potentials and therefore they should not allow themselves to be distracted from their future goals with sexual acts and immoral behaviours.

He advised adolescent girls to be bold and strong to report teachers and unscrupulous men who might make advances at or sexually abuse them to school authorities or the police for necessary action to be taken.

She urged girls not to demand money and luxurious items from men who could take advantage of that to abuse them and truncate their education.

He condemned parents, religious and community leaders, who cover up SGBV cases and failed to expose offenders because they were either friends or family, saying such acts further exposed the victims to danger as the culprit walked free with impunity.

Corporal Twum said the continuous increase of sexual abuse cases in the Region was disturbing and urged girls to be careful about the kind of relationship they engaged in.

Mrs Thywill Eyra Kpe, the Central Regional Director of the Department of Gender, said SGBV was being perpetuated in many communities because victims had not been empowered enough to deal with the issue resolutely.

She said education on the subject was not targeted at breaking families and homes, but to caution people whilst empowering victims to make informed decisions about what was happening to them.

She encouraged participants to be advocates of gender based violence to help victims in many communities overcome them.

The adolescent girls were educated on changes in adolescence, importance of Gender equality and women empowerment, understanding gender, equality, SGBV and health and legal implications.