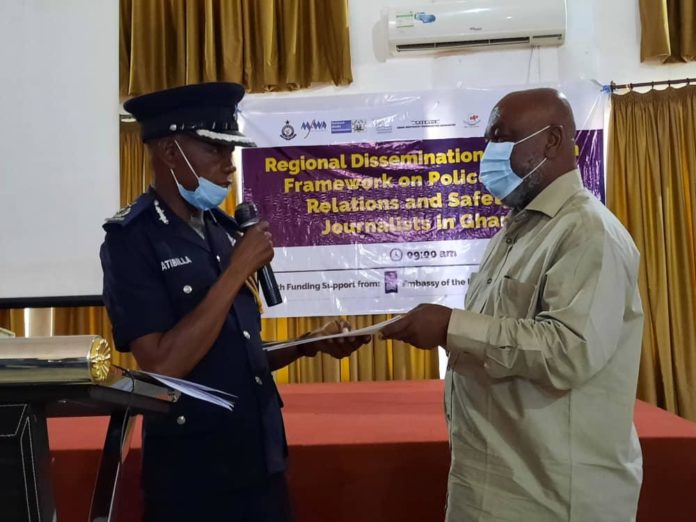 Police personnel have been advised not to seize working equipment belonging to journalists on the basis that they have captured scenes or sounds illegally.

Professor Kwame Karikari, a communications Expert, who gave the advice, said seizing equipment of journalists in line of duty was not sanctioned by law, adding that it amounted to censorship, which the Constitution frowned on.

He was speaking at a day’s forum in Tamale organised by the Media Foundation for West Africa (MFWA) to disseminate the Framework on Police-Media Relations and Safety of Journalists in Ghana.

The police and media play crucial roles in the protection of democracy and the rule of law. In an election year, these roles are even more critical and it is, therefore, imperative that there should be cooperation and mutual understanding between journalists and the police in the interest of peace, rule of law, public safety and enjoyment of rights.

The Framework on Police-Media Relations and Safety of Journalists is therefore, aimed at strengthening the relations between them providing modalities for promoting and protecting the safety of journalists and addressing violations against journalists.

It recommended amongst others that the “GPS must initiate internal processes of awareness building among personnel for service men and women to be aware of the need to involve media in their work,” and “In their relations with the media, the police must at all times recognise and respect the rights, responsibilities and independence of the media.”

Professor Karikari called on the police to respect the independence of the media and collaborate with them to serve the people and said both institutions depended on each other in the performance of their duties.

Most of the time, police in the country seize and destroy equipment of journalists on the basis that they capture scenes and or sounds when they are not authorised to do so.

Professor Karikari said “Police must desist from acts intended to restrict or limit journalists from doing their work. In enforcing the laws in situations involving journalists at work, the police must use necessary, but proportionate measures guided by respect for the journalists’ freedom to inform the public.”

He also cautioned journalists not to misconstrue collaborating with police to mean shielding any bad thing the police did urging them to report whatever was in the public interest.

Deputy Commissioner of Police (DCOP) Mr Moses Asabigwa Atibilla, Deputy Northern Regional Police Commander observed that since the launch of the Framework, relations between the police and the media had improved expressing hope that it would be sustained and deepened for the benefit of the country.

DCOP Mr Atibilla was also hopeful that the Framework would help to eliminate the mistrust between the police and the media for both institutions to complement each other to enhance their work while promoting peace in the country.

Mr Yakubu Abdul Majeed, Northern Regional Vice Chairman of the GJA, who was represented during the forum, called for cordial relations between the police and the media in the region to facilitate their work.

Some of the journalists, who attended the forum, expressed the need for both media and police to strictly adhere to the Framework to ensure accurate reportage to enhance security in the country.