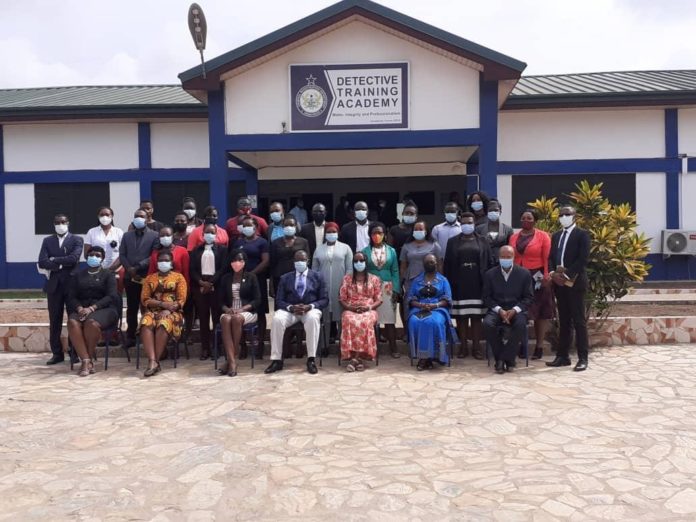 Fifty personnel from the Domestic Violence and Victim Support Unit (DOVVSU) of the Ghana Police Service are undergoing a three-week training on Sexual and Gender-Based Violence (SGBV) to sharpen skills in case handling.

The ten male and 40 female investigators drawn from Accra and Tema regions would be taken through topics such as; Building and Labelling of SGBV Exhibits, Scene Management, Techniques in Investigations, Interview and Interrogation Techniques.

Commissioner of Police (COP) Mr Isaac Ken Yeboah, Director General of the Criminal Investigation Department, charged participants to position themselves to professionally handle cases during the COVID-19 pandemic and beyond.

He said SGBV and Domestic Violence had negative effects on developments of countries as they impacted not only the health of the victims but also their security, economic, social and psychological wellbeing.

COP Yeboah asked the personnel to desist from bringing their challenges to work as victims already would come to them traumatized and the way they would be received would either ease or worsen their plight.

He said some victims may never return to DOVVSU whilst others would be relieved after having realised that somebody had listened to them and, therefore, urged them to be committed to their mandate.

He called on the media to avoid publicising sensitive cases that would affect police investigations.

Chief Superintendent Owusuaa Kyeremeh, the Director of DOVVSU, said the training, being sponsored by the United Nations Population Fund (UNFPA), was limited to Greater Accra due to the COVID-19 pandemic.

She said about 250 personnel would benefit by end of 2020 as it would later be extended to other regions online.

The training would enable participants to build their case dockets to secure justice for victims to serve as deterrent to others, she said.

Ms Kyeremeh said Ghana, during the COVID-19 pandemic, had not recorded an increase in domestic violence cases.

Dr Agnes Nti Bamyuriwa, the Deputy Country Representative of UNFPA, called on the public not to tolerate sexual violence but join in its fight, saying the Fund was aiming at zero tolerance for SGBV.

Superintendent of Police, Ms Grace Ansah-Akrofi, the Commandant of the Detective Training Academy, commended UNFPA for its continuous support to the Academy, especially in training and provision of logistics.