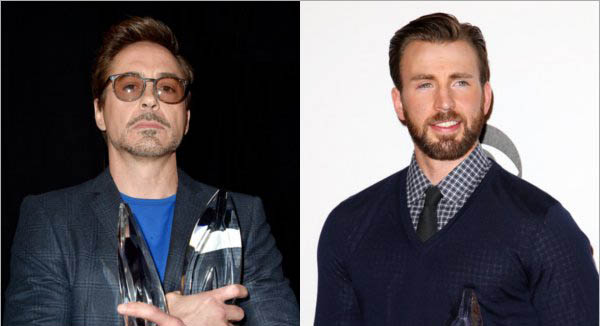 The winners of 2015 People?s Choice Awards have been revealed. During the ceremony which took place on Wednesday, January 7, winners from various categories in movie, TV and music were announced. In movie category, Robert Downey Jr. and Chris Evans were among those who took home trophies. The Iron Man depicter was honored with the Favorite Movie Actor and Favorite Dramatic Movie Actor trophies, while his teammate in ?The Avengers? won Favorite Action Movie Actor award.

Downey won his Favorite Movie Actor gong from the annual awards show after defeating other stars including Brad Pitt, Channing Tatum, Hugh Jackman and Mark Wahlberg. ?This is perfect for me because I love people, I?m crazy about movies, and I prefer people who love my movies,? he said in his speech. The Captain America depicter, meanwhile, beat Denzel Washington, Hugh Jackman, Liam Neeson and Mark Wahlberg for the trophy. ?Thank you. I don?t win stuff, so this is kinda cool,? the ?Snowpiercer? star said onstage. ?Thank you to the people who love movies, who see movies, who are passionate about movies. Without you guys, I?m lost, so thank you for giving me a purpose. I?ll say forty percent of the votes were my mom, but the other sixty percent? I?m eternally grateful, so thank you,? he joked.