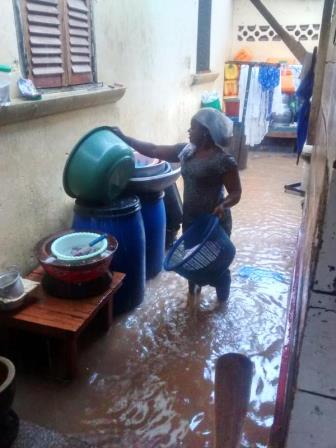 Storm drains, such as the one built on the Odaw River, also became pitiable sights of garbage, mostly made up of empty plastic bottles and water sachets.

When the Daily Graphic visited some areas such at Adabraka, around the Kwame Nkrumah Circle and the Obetsebi-Lamptey Roundabout, the large volumes of water that flowed into the drains and gutters showed that although it had not rained for long, some minimal flooding had been experienced.

Residents were only spared the worst because the threatening weather abated after just a short while. Automobile companies on the Graphic Road, such as Toyota Ghana Limited and Rana Motors, which had been bringing out the vehicles in their showrooms to the pavement along the street to minimise the damage to them during floods, were also spared another ordeal.
odaw

River strewn with refuse
Nonetheless, the unsightly seen of refuse on the surface of the rushing waters of the Odaw River made a strong statement that some residents had not changed their insanitary ways.

The mass of refuse at the New Fadama (Sodom and Gomorrah) end of the river was a foreboding of what may happen if the rains come down again, especially if they last for a longer time.

Parts of Accra experienced floods after about three hours of rain on October 9, raising concerns over what was being done by the city authorities and the government to save residents of Accra from more floods.

After the June 3 twin disaster of fire and flood that claimed 159 lives, the government put in place a five-member committee to look into what caused the fire during the floods.

The committee, which has since then presented its report to the President, made some recommendations, including the complete dredging of the heavily silted Odaw River canal to prevent flooding of the Kwame Nkrumah Circle and its environs.

Suffering the same fate were three other stations in the Multimedia stable and housed in the same building ? Asempa FM, Adom FM and Hitz FM.