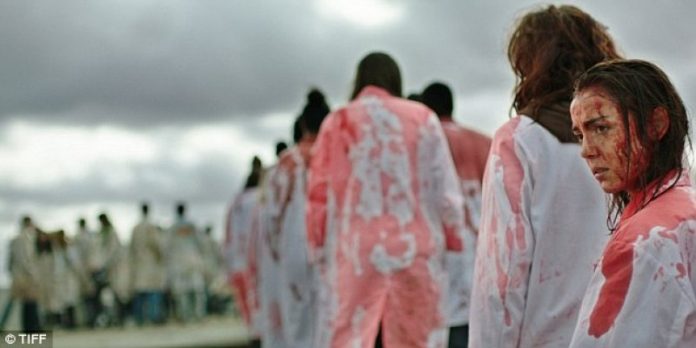 Some movie goers at the 2016 Toronto International Film Festival found the new cannibal film Raw hard to stomach, so much so that paramedics had to be called to the cinema.

Several people who attended the midnight screening of the ultra-graphic body-horror flick were said to have fainted and required medical attention.

Ryan Werner, who is in charge of the movie’s marketing in Toronto, told The Hollywood Reporter that an ambulance had to be summoned to the scene.

‘The film became too much for a couple patrons,’ he said.
The French-language genre film, written and directed by first-time filmmaker Julie Ducournau, follows Justine, a young vegetarian veterinary student, played by Garance Marillier, who gradually turns to cannibalism after undergoing a grisly hazing ritual at school involving blood and raw liver.

The much talked-about film premiered at the Cannes Film Festival in May, where it won the FIPRESCI Critics’ Prize.

Speaking to IndieWire just before the Toronto Film Festival premiere of her visceral film, Ducournau said: ‘I want to hear this particular audience reacting. I want to see where they will be reacting. I am very curious. It’s like being judged by my peers, because myself, I am a huge genre and horror buff.’

The French director also, somewhat prophetically, talked about the challenge of keeping ‘the audience in the room,’ which she said she found ‘very interesting.’

Raw’s next top on the festival circuit is Fantastic Fest. Focus World, the art house film division of NBCUniversal, bought the distribution rights to the film out of Cannes and will release it in the US at a late date.