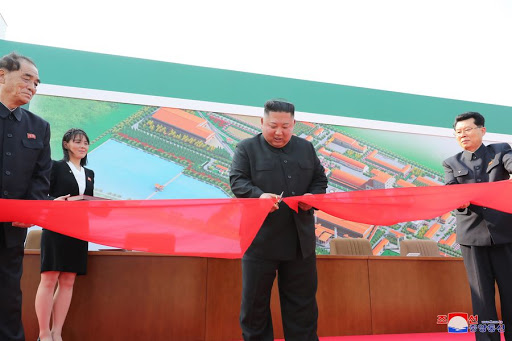 An official newspaper of the Democratic People’s Republic of Korea (DPRK) on Saturday published photos of its top leader Kim Jong Un, whose recent disappearance has triggered much speculation.

The pictures posted by Rodong Sinmun were dated May 1 and were Kim’s first public appearance in weeks. The whole front page and the second page carry a story with a dozen color-printed photos of Kim, showing the leader was cutting the ribbon for the completion of the Sunchon Phosphatic Fertilizer Factory northeast of the capital Pyongyang, visiting the factory and talking to workers.

A large photo of Kim smiling and looking healthy is displayed in the center of the front page, with eight pictures of Kim attending the event printed down below.

The second page continues with the story and several other photos. Kim’s sister Kim Yo Jong as well as other senior officials, including Pak Pong Ju, member of the Presidium of the Political Bureau of the Central Committee of the Workers’ Party of Korea, were also present at the ceremony. It was Kim’s first public appearance since April 11, when he presided over a meeting to discuss the coronavirus.