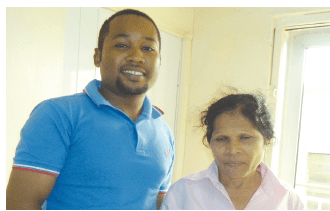 There?s nothing odd if a Nigerian or African being is found to be a Hindu worshipper, but when you see a Born Again, tongue-speak?ing and Holy Ghost filled Indian national, something out of the ordinary certainly must have taken place. OVIE DANIEL spoke with one re?cently and filed in this report.

Dr Ambuja Eberendu is a Nige?rian-Indian by marriage born in Hyderabad in the Middle Belt re?gion of India in 1954 to a business man father and a simple house?wife mother.

The 3rd of four children, Dr Eberendu as she prefers to be called is married to Mr. Sistus Eberendu, a son of Mbaise East Local Government Area of Nge?ria?s Imo State. A medical prac?tioner of many decades in three countries, Eberendu took our cor?respondent to the circumstances that made her prefer a Nigerian to an American engineer for mar?riage and the encounter that re?vealed Jesus Christ to her as her Lord and Saviour:

Growing up in India:

As an adolescent growing up in her home country, Eberendu attended the standard six class under India?s primary education?al structure and went on to the senior high school for five years. Thereafter she enlisted into the Pre-Nurse City Coast before join?ing a specialized medical school. It wasn?t in her dream to be a doc?tor, she told Daily Times.

?I did not decide to be a doctor, it is God?s will. I applied for all the courses after my secondary school but one of my relation sug?gested I apply for medicine also, so I rushed to get all the papers for the medical course, and when the list came out, I was the first on the list.?

She said of her husband: ?We courted for six months then we got married on the 13th of De?cember 1982. We stayed in Delhi for six months and on the 7th of May 1983 we came to Nigeria and stayed in Kano?.

The mixed marriage produced a son and a daughter. The son, whom Dr Eberendu calls ?Baba? is Kelechi John Eberendu, now 26 read applied zoology but did his second degree in aircraft maintenance engineering. Now a graduate of aircraft engineering Kelechi is working with an airline here in Lagos while the daughter of the family is in Canada read?ing medicine. He said of having a Nigerian father and an Indian mother:

?Well there?s really no special feeling, except that the lifestyle of my mother is clearly different from the general lifestyle we have with mothers in Nigeria. The In?dian mother is more disciplined and straightforward. She tells you things strict and don?t attempt to pet you?.

At the opposite end of his fa?ther?s profession, Kelechi feels that flying is a boring job; ?Excit?ing to some other people may be, but to me, it?s a routine profes?sion: what the pilot did today is what he?ll do tomorrow, but in engineering we?re diverse and dy?namic; we do a lot of things and is a lot more handy?.

I was recalled to Nasarawa Hos?pital after a time and I constituted the team that opened the new the?atre at Sabo Bakin-Zuwo. After that I sort a break from the Nigeri?an environment and went to Sau?di Arabia where I worked for two years. In 1992 her husband called me and broke the news that our property in Kano has been robbed during the Hausa-Ibo crisis. I had to leave the job and returned im?mediately to Nigeria in 1992 be?cause apart from the property, our two children were in Kano also.?

Of medical practice in Nigeria she said:

?Well it was very good; at least I was doing about seven caesareans a week and other surgeries are there in between. I was very busy at Adeniyi Jones.?

Specialists in her team include a surgeon, entomologist, derma?tologist, paediatrician, Ear Nose and Throat (ENT), orthopaedic, cardiologist, and a respiratory doctor.

Comparing the difference in medical practice between Nigeria and India, Eberendu said there?s a vast difference:

?We Indians don?t work because of money, we work because it?s our duty; we devote our lives to?wards our patients; we work hard to make sure our patients are al?right. But here in Nigeria?, she hesitated, and shook her head; ?I don?t know, please don?t let me say anything about medical practice in Nigeria; I don?t want to commit any offence.?