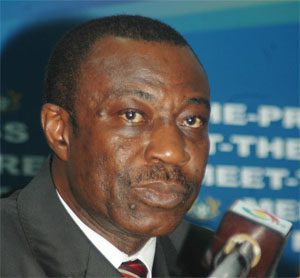 The ranking member of the Finance Committee of Parliament and New Patriotic Party (NPP) Member of Parliament (MP) for Old Tafo, Dr Anthony Akoto Osei on Wednesday told Parliament that he had never called for the freeze of the Single Spine Pay Policy (SSPP) but rather it is the intention of government to suspend the policy and retrench workers with retrenchment packages.

He said the SSPP is a very good policy to appropriately reward labour but its implementation has been dogged by serious problems.
He therefore proposed a holistic review of the policy and asked government to be candid to workers about the spiral effect of the policy and the need for its suspension to save the troubled economy.

He indicated that during the Daily Graphic/Fidelity Bank Breakfast meeting on Tuesday, he never called for total freezing as being reported by a section of the press but was rather re-echoing government?s intention to suspend the policy because of its debilitating effect on the finances of the nation.

He noted that the government was talks with Organised Labour about the possible deferment of the policy for structural review.

Dr Osei, who expressed these sentiments in a contribution to the President?s State of the Nation Address further indicated that the President admitted that the Single Spine Pay Policy was having spiral effect on the economy and needed to be re-looked.

?This is an indication that government is thinking of suspending it in the meantime to save the troubled economy,? he said.

He supported his argument with material proof from the 2012, 2013 and 2014 budget statements which indicate the government?s clear intention to streamline the policy.
He said so far the market premium, category two and three and productivity relating to the Single Spine Policy have all been scrapped by the government.
?I also made reference at Tuesday?s breakfast meeting to the fact that government was also planning to retrench workers with retrenchment packages,? he said, adding that $6.4 million of $30 million loan agreement and $10 million grant recently approved by Parliament for the re-structuring of the Ghana Statistical Service (GSS) had been earmarked to be used to pay retrenchment packages of some workers, who would be retrenched at the GSS.
?Mr Speaker, it is a known fact that 89 out of the 300 people working at GSS are going to be retrenched with the package of the $6.4 million as approved by Parliament,? he said, adding that indeed the economy is in real trouble and government must quickly and decisively act to save it.
The NPP MP for Upper Denkyira West, Benjamin Kofi Ayeh, in supporting the argument, said he was surprised the government had made a huge fuss about the Single Spine Pay Policy because it told Ghanaians that it had been able to fulfill its promise to Ghanaian workers.
?Mr Speaker, indeed the implementation of the Single Spine Pay Policy is facing serious challenges and needs proper auditing,? he said, stressing that out of 14 strike actions recorded last year eight were related to labour and remuneration.
He also faulted the government for not giving adequate resources to the National Labour Commission to carry out its mandated functions to help resolve labour issues expeditiously, disclosing that allowances that ought to be paid to Labour Commission members are outstanding since January 2013.